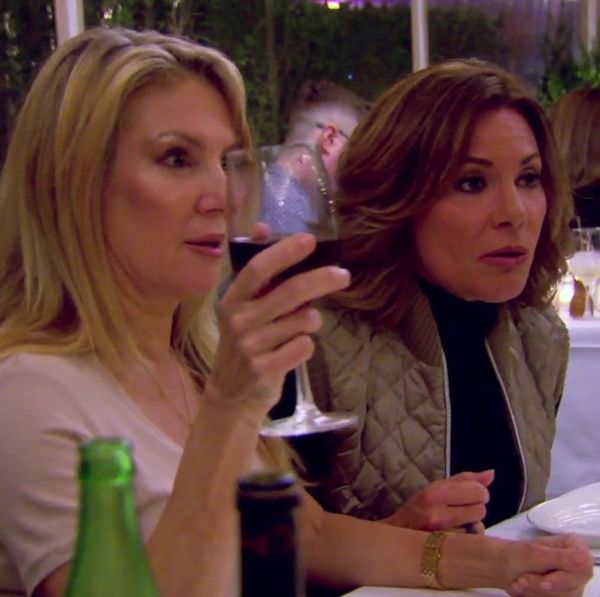 The housewives are in Sag Harbor, a small village full of white pants, white people, and white boats. Sag Harbor is in the Hamptons, an exclusive beach community near New York. Sag Harbor is the title of a PEN/Faulkner award-nominated novel by author Colson Whitehead. It’s about an African-American teenager spending the summer in Sag Harbor. It’s a good book. It has nothing to do with this episode of the Real Housewives of New York.

@Bethenny facial expressions are all of ours while watching #RHONY right now pic.twitter.com/ADbhD7Z4te

A brisk fall wind is upon the women and yet their hair doesn’t move. Luann’s hair barely moves as she’s piloting a small speedboat along the water. I am not going to lie to you: Luann looked cool driving that boat. Her navy blue puffer jacket was crisp and seemed as though it smelled of the freshest department store. 30 minutes later, we discover that Ramona, Dorinda, and Luann have established an alliance of hatred and they are going to GET Sonja for gossiping online about Dorinda and saying something about how she mixes synthetics and silks! For the first time this season, Luann is in control. Fewer people are talking about her husband-to-be and the fact that he loves giving tons of ladies kisses on the lips. It’s because Luann looked dope as hell on that boat. Luann is the captain now.

There really isn’t much else to talk about in this episode because it turned out to be a big ol’ TBC tease for next week, when the entire cast turns into a Hell’s Angels choir while attending yet another boring looking party with crummy looking food. Tinsley tells Sonja to throw out her giant white Christian Dior underpants as Sonja whines about how she could give them to her daughter. Sonja, it’s cool that you put your silicone toys in the dishwasher but give us a break and don’t share panties with your adult children. There is a scene where clearly Ramona had done five shots of glue and asked Bethenny whether her six-year old was upset about Bethenny’s topless photos that were leaked to the press. Carole is in a state of malaise over the impending election of Donald Trump and is mad at Ramona for believing that Hillary ran a child porn pizza shop. Dorinda responds that if Trump is elected she will tell her beloved daughter Hannah to scoop out her own brain and become a stripper, which is offensive as the last stripper I met was just trying to put herself through an engineering degree at a prestigious college.

But here is something to keep in mind as we move forward in this season: Dorinda, while drinking a wine glass full of Coca-Cola, tells Carole that she has a secret friend who is able to acquire the equivalent of the Pentagon Papers on whatever New York high society idiot. Her first target will be Sonja, of course. Carole is electrified. Carole wonders if it’s a private investigator. Dorinda fondles her phone screen and says no. Is it the FBI? It’s not quite the FBI. Interpol? Incorrect. Tinsley and Sonja pull up to the beige house in some chauffeured car, about to enter another RHONY party that will hopefully end in a spaghetti fight. Meanwhile, inside, Dorinda continues to brush the tips of her fingers over her phone, intimating that she may dial her special secret contact. Carole’s beautiful mouth grows wider and wider with surprise and glee as she consumes all of it — Dorinda, life, the universe, and everything.

Were you expecting to see Luann take charge? And what about Dorinda’s mole?? Tell us what you thought @BritandCo!