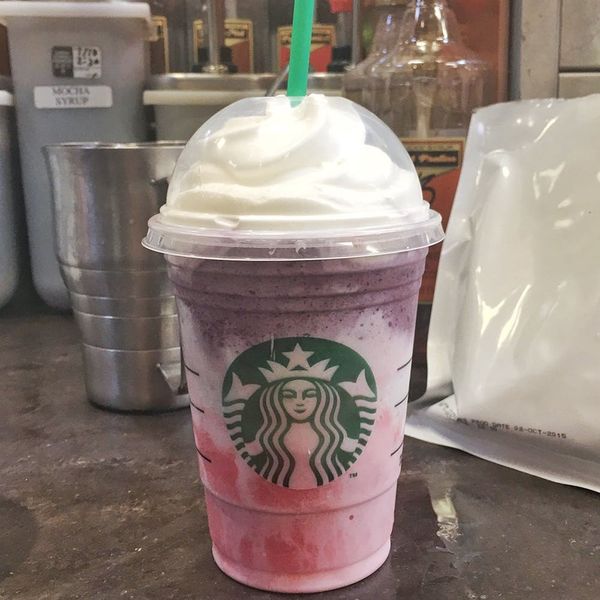 Okay, so the days of candy cane frappuccinos are now officially behind us, but never fret my Starbucks obsessed friends. It looks as though there is a new holiday menu to look forward to – but there’s one catch: this one is on the DL. While Starbucks has yet to release any official Valentines Day drinks, Tony Aguilar, an employee at a licensed Starbucks in a Tuscon, Arizona grocery store has gone ahead and created a few festive drinks to go with their themed merchandise.

In a Reddit post, Aguilar shared photos of three super colorful beverages, each with a clever name. However, if you want to order one of these bad boys, don’t ask your barista for a “love bean frappuccino” because they’ll probably have no idea what you’re talking about. Instead, we recommend sharing the ingredient list Aguilar has supplied in his post. Scroll on down to see which super sweet frap you should order to counteract your singleton-induced bitterness towards the upcoming holiday.

Valentine Frappuccino: (Bottom to top) Strawberries and cream with raspberry pumps to make it extra pink, vanilla bean in the middle and blackberry on top, topped with whipped cream.

Cortney Clift
Cortney is the senior writer and special projects editor at Brit + Co. She typically covers topics related to women's issues, politics, and lifestyle. When she's not buried behind her computer you'll find her exploring New York City or planning her next big adventure.
Starbucks
Food News
Starbucks Valentines Day
The Conversation