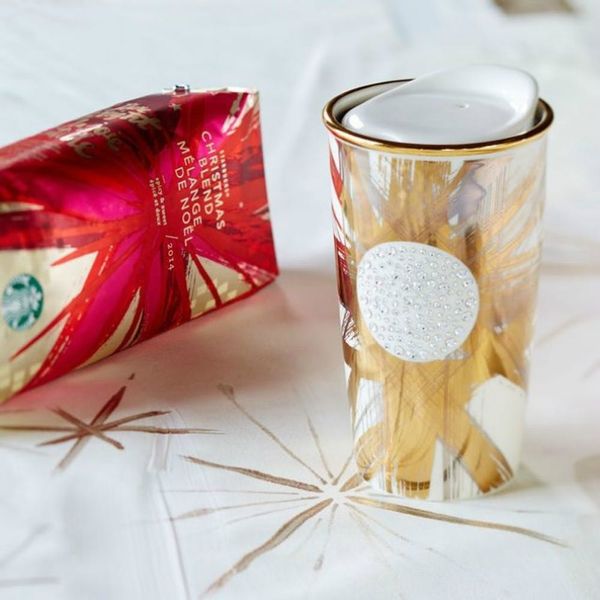 Those Starbucks people. They really are the cleverest. They’ve been distracting everyone with this whole red holiday cup controversy and meanwhile, they’re working on something amazing: A secret holiday menu with drinks that make hot cocoa sound oh so drab. Forget visions of sugarplums — you’re going to be dreaming about six sweet holiday-themed drinks.

The not-so-secret menu includes five Frappucino flavors — Candy Cane, Christmas Cookie, Biscotti, Apple Pie and Cinnamon Crunch — and a s’mores flavored Hot Chocolate. How can you get your hands on one of these six new holiday-themed beverages? You’re probably thinking you have to be some sort of VIP member with a gold Starbucks card or in the PSL society (that’s actually a real thing). But no! British magazine Look dished on what exactly to tell your barista so that you can start sippin’:

2. Candy Cane Frappuccino: Order a vanilla Frap and add two pumps of peppermint syrup as well as extra cream and a caramel drizzle.

3. Biscotti Frappuccino: Choose any Frapoucino flavor and ask the barista to throw a biscotti in the blender.

4. Apple Pie Frappuccino: Ask your barista to fill half your cup with milk and the other half with apple juice. Then have him or her add two pumps of cinnamon and two pumps of caramel syrups. Ice and mix. Then go into a sugar coma.

5. Cinnamon Crunch Frappuccino: Order a white mocha and add one pump of cinnamon syrup and one pump of hazelnut syrup. Sprinkle cinnamon powder.

6. S’mores Hot Chocolate: Order a chocolate Frap or a hot chocolate and add one pump of cinnamon syrup and one pump of toffee nut syrup to your drink. Blend and then add cream, chocolate sauce, biscuit bits and marshmallows until you elevate off the ground from sugar.

Will you try ordering off the Starbucks Secret Holiday Menu?

Meredith Lepore
Meredith is a freelance writer/editor who writes for Levo League, Bustle, Refinery 29, Instyle.com as well as magazines including Marie Claire, SELF, Women's Health and Cosmopolitan. Before going freelance she was Editor in Chief of the women's career site The Grindstone. She earned her Masters in Magazine, Newspaper and Online Journalism from the Newhouse School at Syracuse University. Meredith resides in New York full time and enjoys SoulCycle, jogging and playing with her Yorkshire Terrier Otis, who also loves SoulCycle.
Starbucks
Food
Starbucks
The Conversation