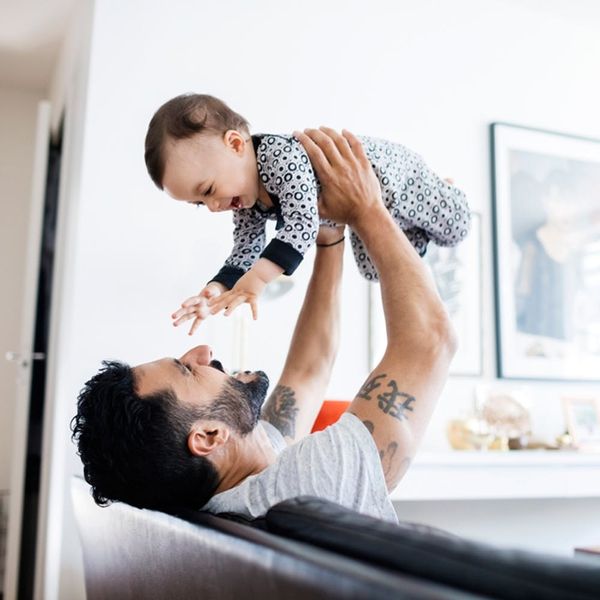 Now more than ever, dads are joining in on the stay-at-home fun and becoming primary caregivers. How many to be exact? According to the National At-Home Network, there are more than 1.4 million stay-at-home dads (SAHDs) — and that’s a conservative estimate. Unless you’re currently married to Don Draper, and it’s 1963, you probably don’t subscribe to the idea of parenting that all moms stay at home while dads head out to make a living. If you’re in the middle of making a “Who will stay at home with the baby?” decision, read on for six reasons why it should be your guy.

1. You want to work. In 2015, almost 68 percent of all married moms worked, according to the US Bureau of Labor Statistics. Some moms have to work, and some moms want to work. Hey, you had a baby because you wanted to be a mom, but that doesn’t always mean that you need to give up the job you love. If you absolutely adore what you do and can’t imagine life without work, Dad might just be the obvious choice for staying at home with your little one.

2.Dads are awesome parents. Gender stereotypes have given dads a bad rap. Don’t buy into the hype. Men are much more than glorified babysitters who show up for a ball game or random spring carnival once in a while. There’s absolutely, positively no research out there saying that men can’t care for kids just as well (if not better, depending on the parent) than women.

3. His job sucks. Four years of college and a few more in law school. He puts in 80 hour weeks and has a job that definitely pays the bills, but he kind of hates it. His boss is an ogre, and now that he’s a dad, he’d rather spend Saturday afternoons with you and his mini-me than with his laptop. You both work and have saved enough money that one of you can stay home. You’re all about the work that you do, so maybe Dad quitting his sucky job and doing something he loves (like taking care of his kiddo) is the way to go.

4. Child care isn’t cheap. You’re a two-working-parents family, and before baby that meant double the money. Now it means you’re paying hefty daycare fees. Well, at least you can both go to work… most of the time. Every time your baby gets an ear infection, has a fever, or picks up some mystery illness, you have to keep her home. That means paying for child care and losing a day of work. Every month it seems like your entire paycheck (and plenty of your sick, vacation, and personal days) is disappearing from your bank account and magically reappearing in the daycare’s. Halving your family income may not make a difference if your child-care expenses outweigh one of your salaries. If you have equal incomes, you really don’t have a reason to say no to him staying home.

5. You make more money. So, you’ve decided that one parent needs to stay home. It’s just how you feel as a family. Tradition says that you’ll quit your job and turn into a stay-at-home mom, but you don’t love that tradition. And, beyond that, the idea that women can’t earn more than men just isn’t true. Sure, we’re often offered and paid less, but it just so happens that you’re the real breadwinner of the family. Instead of letting the spouse who makes the most stay home, keep your job and keep earning, lady!

6. He wants to stay home. Not every little boy has dreams of growing up and working a nine-to-five. And not every little girl has hopes of someday giving up her career and staying home with a baby. Some dudes have always wanted to be dads. They may even be “manly men,” who change tires, lift heavy objects, and throw footballs across fields. But, when it comes down to it, some men want nothing more than to stay at home and care for their children. If this sounds like your guy, it looks like you’ll have an SAHD who is more than happy to take on the role.

How are you deciding who will, or won’t, stay at home? Share your tips and tweet us @BritandCo!

Erica Loop
Erica Loop is a freelance writer living in Pittsburgh. When she's not busy creating kids' activities for her blog Mini Monets and Mommies, you can find her trying to hang out with her teenage son, being chased by her two Olde Boston Bulldogs or teaching a children's karate class (she's a third degree black belt!).
Parenting
Parenting
Parenting
More From Parenting