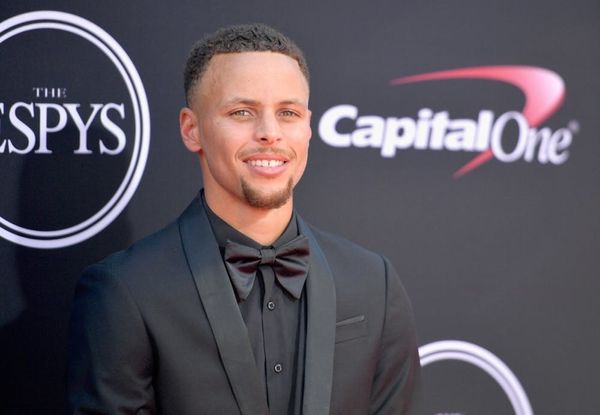 Steph Curry is a man of his word. Back in November, the athlete made an important promise to 9-year-old Riley Morrison, who wrote to the three-time NBA champion to ask why his basketball shoes were available in only boys’ sizes. Curry, who is a father of three kids (including two daughters) and an advocate for women in sports, assured Riley that he would fix the situation. And he did — with some help from Riley herself.

On Friday, March 8 — International Women’s Day — Curry released the latest edition of his sneakers, the Under Armour Icon Curry 6 “United We Win” shoes, which come in purple and feature a sock liner designed by Riley. The liner has a drawing of two girls playing basketball, with phrases like “Rock the Currys,” “Girl Power,” and “Be Bold.”

Riley was invited to the launch in Oakland, California, where Curry surprised her during an interview with CBS This Morning. As the young Golden State Warriors fan chatted with CBS News‘ Dana Jacobson about the letter she wrote to Curry, he walked into the room — and her face immediately lit up.

After a hug, the two sat down to discuss their collaboration. “I wanted to make sure that [Riley] was a part of that,” Curry told Jacobson. “So it’s awesome to be here to see the entire story come full circle.”

As for what it was like to see her shoe become a reality, Riley admitted, “It’s a dream come true.”

The shoes will also lead to dreams coming true for other girls, thanks to Riley’s initiative and Curry’s efforts. According to Riley’s father, Chris Morrison, who spoke with NBC Sports Bay Area, the proceeds from sales will fund a scholarship that will be awarded annually to a “girl who is a catalyst for change.” Curry’s company, SC30, noted that it’s specifically for college-bound women who plan to pursue studies in a STEM-related field. The first recipient is an Oakland Tech senior named Vivian Wu.

The scholarship was announced at Friday’s Warriors game, where Riley was honored for having the courage to stand up for what’s right. “We all have a voice,” she told CBS. “By simply writing a letter, you can make a change.”

Desiree O
Desirée O is a ‘Professional Bohemian’ who loves anything and everything related to the arts, entertainment, and pop culture. She ADORES being a ‘Newsy’ for Brit + Co, covering all of the latest tidbits of awesomeness that you want to read about. When she’s not writing, she’s either making messy art, going on long adventurous walks with her camera, or poking around over at bohemianizm (http://www.bohemianizm.com/). You can find out about Desirée O and her work at http://DesireeO.com/ or follow her on Twitter @DesireeO.
International Womens Day
Empowerment
International Womens Day
More From Empowerment