Sterling K. Brown Got Played Off at the 2017 Emmys But Here’s the Rest of His Speech 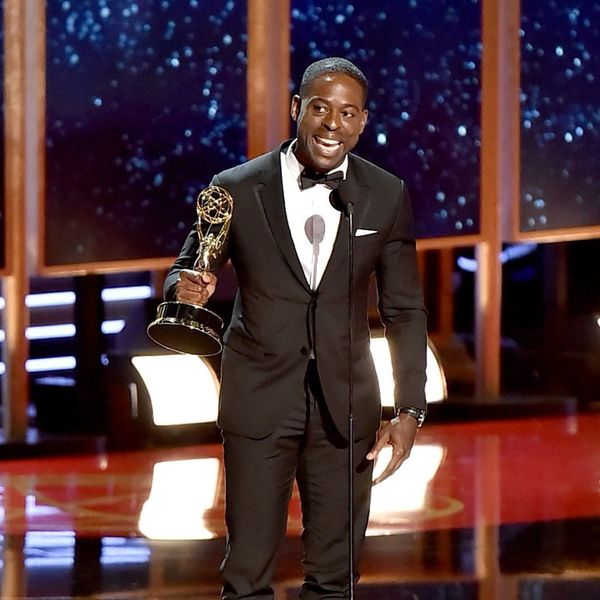 The 2017 Emmy Awards ceremony had its share of memorable moments. Some were good, like Stephen Colbert’s opening musical number, and some confusing, like Jackie Hoffman’s faux outrage at losing to Laura Dern. One moment that sticks out was Sterling K. Brown’s win for Outstanding Lead Actor in a Drama Series category, not only because of its significance, but also because he got played off, as often happens at awards shows.

Brown was in the midst of thanking his This Is Us TV family in the audience, calling them “the best white TV family that a brother has ever had,” not long before the cut-off music began to play.

“You can play, you can play,” Brown said on the mic. “Nobody got that loud music.” He went on to start to thank the show’s writers, but his mic was cut and the camera pulled away. Viewers were not happy.

Dear @TelevisionAcad, SHAME ON YOU for giving Nicole Kidman 6 months to speak and cutting off Sterling Brown. We ALL noticed! 😡😡😡 #EMMYS

Does Sterling Brown get to finish his speech now? #Emmys

Sterling Brown, good for you refusing to be played like that.

Brown eventually made his way backstage to the press area, where he was able to finish what he wanted to say on stage, starting with acknowledging This Is Us’s writers, producers, and directors — and, of course, its creator, Dan Fogelman.

“I wouldn’t mind finishing. I wanted to thank our writers,” he said. “A show doesn’t get seven acting nominations without some impeccable, beautiful, thoughtful writing. You guys are our life’s blood. To our producers and our directors, in particular John Requa, Glenn Ficarra, and the crazy cool Ken Olin, thank you for your guidance and friendship. And I wanted to thank Dan Fogelman, he is the Hebrew hammer with which our house is built. He makes me laugh and cry in equal parts and keeps me coming back for more, and in his own little, small, special way. He’s not trying to make America great again; he’s trying to make it the best that it’s ever been. I love him for taking me on this journey.”

Brown then went on to give a nod to his manager of 17 years, before taking time to give a special shout-out to his family.

“And to my wife, they cut me off before I got to thank my wife, Ryan Michelle Bathe,” he continued. “You’re everything. You make my life worth living. You gave me two of the most beautiful things that God has ever put on this planet: my sons. Your daddy loves you with the strength of a thousand suns. I’ll see you Monday after work.”

Brown is the first Black actor to win the category since 1998, when Andre Braugher took the award for his role on Homicide: Life on the Street. It’s Brown’s second consecutive Emmy after his win for Outstanding Supporting Actor in a Limited Series or Movie in 2016 for The People v. O.J. Simpson.

What do you think about awards shows cutting speeches short? Let us know @BritandCo!