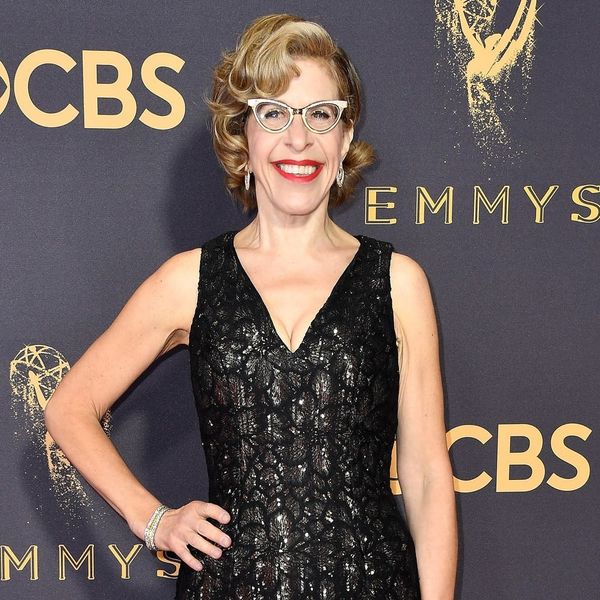 If you’ve ever been nominated for an award, you probably spent at least half as much time trying to master your gracious loser face as you did writing your acceptance speech. For celebs at awards shows, the pressure is on to remain cool in the face of defeat (and in front of millions of audience members), which is why Outstanding Supporting Actress in a Limited Series nominee Jackie Hoffman has people taking notice after her loss to Laura Dern at the 2017 Emmys.

Best moment of the #Emmys so far: Jackie Hoffman yelling "dammit!!" when she lost to Laura Dern pic.twitter.com/euCWaRFsAy

When presenters Issa Rae and Riz Ahmed announced Big Little Lies’ Dern as the winner, the cameras zoomed in on each of the other nominees, and that’s when Hoffman let it rip, yelling, “Damn it, damn it!” in faux outrage. (Given her comedic past, most people assumed she was just putting on a show.)

After a few more posts, Hoffman caught wind of the response to her self-proclaimed #soreloser tweets and felt compelled to let folks know she was joking.

I hear the media actually taking my reaction seriously? Are you kidding me?

Hoffman has had a varied and exciting career as a character actress, but had never been nominated for an Emmy before this year, which she kind of alluded to in yet another tweet during the ceremony. “OK Ann Dowd went through this 7 times before she won so I feel better now,” she wrote, referencing Dowd’s win for Outstanding Supporting Actress in a Drama Series for The Handmaid’s Tale. “I love her.”

Hoffman didn’t note Dern’s history with the awards show, but the Big Little Lies actress was nominated five times before this year, and this was her first win. Sometimes, as they say, these things take time.

What do you think of Jackie Hoffman’s reaction? Tell us @BritandCo.

Kat Armstrong
Kat has been a writer, social media maven and mom for longer than she's willing to admit. She's also spent time in front of and behind the camera, interviewing celebs, politicians and acting as a producer for fashion and artistic photography shoots. When she isn't writing for various orgs and publications, she's hanging with her kids, husband and French Bulldog, Peter, in Toronto, Canada.
Emmys
Celebrity News
Emmys
More From Celebrity News