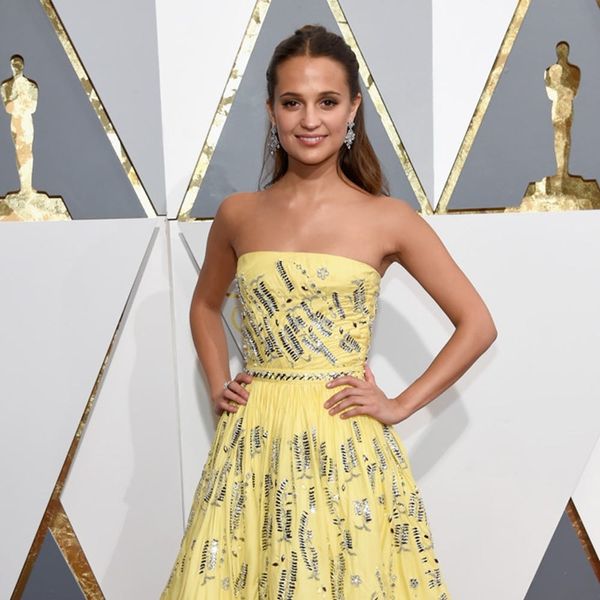 Forget the cutout — yes, even Rooney Mara’s diamond stomach cutout. While stars are still baring some serious skin on tonight’s red carpet, the takeover trend of the evening is aimed at a slightly higher body part: the shoulders. Hollywood is ditching the straps on this year’s red carpet in favor of a classically sexy strapless neckline. While it’s not exactly a groundbreaking style, the wares were far from boring, with no two ladies wearing the look quite the same way. From the subtle ruching of Isla Fisher’s neckline to the draped-to-train, off-the-shoulder sleeves on Mindy Kaling’s modest Elizabeth Kennedy gown, each starlet made the craze her own. Read on to pick a favorite!

It’s no surprise Oscar winner Alicia Vikander looks absolutely stun-ing in her strapless Louis Vuitton princess gown (comparisons to Disney’s Belle are swirling) — it was, after all, custom made for her. With ornate silver beading and a hi-lo hem, the main focus here remains on Alicia’s beautifully bare shoulders. (Photo via Ethan Miller/Getty)

2. Sofia Vergara: Marchesa was the mastermind behind Sofia’s strapless navy frock, and its wraparound bodice and intricate beading at the bust only serve to highlight Sofia’s slender waist. (Photo via Kevork Djansezian/Getty)

Quantico star and presenter Priyanka Chopra flashed just a hint of leg in her sheer Zuhair Murad gown, keeping most of the attention on the gown’s lovely neckline. (Photo via Jason Merritt/Getty)

4. Andra Day: Like Alicia, singer Andra Day glows in a soft yellow strapless piece with a sloping neckline. One half sleeve adds an element of interest to this SAFiYAA dress. (Photo by Jason Merritt/Getty)

5. Mindy Kaling: Mindy Kaling stands out from the strapless pack in this off-the-shoulder Elizabeth Kennedy number. With half-sleeves that tie in back to become a draped train, this piece is just as appealing coming as it is going. (Photo by Ethan Miller/Getty)

The Hateful Eight Oscar nom Jennifer Jason Leigh puts her own twist on the evening’s trending neckline with the addition of an architectural, floral element. (Photo by Jason Merritt/Getty)

10. Lady Gaga: Queen Gaga herself jumps on the strapless train, invoking all the old Hollywood glamour she can muster in this sleeveless Brandon Maxwell pantsuit. Covered up with a curtain-style bodice, Gaga keeps it mostly covered, flashing only sensual shoulders. (Photo by Jason Merritt/Getty)

11. Reese Witherspoon: Reese beams in this violet corset-style bodice with a flared strapless bust and a peekaboo bra. (Photo by Jason Merritt/Getty)

Funny woman Tina Fey punches up her violet wraparound bustline with a bit of purple sparkle — lovely and love the twinning look with Reese! (Photo by Jason Merritt/Getty)

Nicole Briese
Nicole is the weekend editor for Brit + Co who loves bringing you all the latest buzz. When she's not busy typing away into the wee hours, you can usually find her canoodling with her fur babies, rooting around in a bookstore, or rocking out at a concert of some sort (Guns N' Roses forever!). Check out all her latest musings and past work at nicolebjean.com.
Celebrity Style
Style News
Celebrity Style Oscars Red Carpet