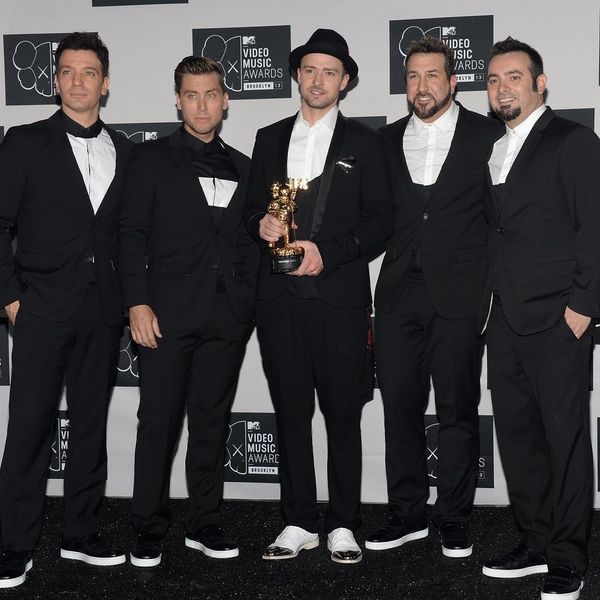 After teasing fans with a cryptic tweet about a “Dirty Pop-Up,” the late-’90s boy band *NSYNC has announced that, from April 28-May 1, they will be launching a merchandise pop-up for fans in Los Angeles to celebrate the 20th anniversary of the band’s self-titled debut album.

“The “DIRTY POP-UP” will serve as the launch of *NSYNC’s official merchandise capsule collection,” the band’s website reads. “Visitors can expect to have first dibs on a limited inventory of official merchandise as well as immerse themselves in the fun, engaging photo activations that pay homage to iconic visuals from the group’s career.”

Fans able to attend the pop-up will also get a peek at props, wardrobe, artwork, and photography from the band’s touring days. Admission is free.

For those not familiar with the illustrious history of *NSYNC, the group was founded in 1995 in Orlando, Florida, and spawned successful careers for Lance Bass, Joey Fatone, Chris Kirkpatrick, JC Chasez, and, of course, Justin Timberlake. While fans of the band have been hoping for a musical reunion, the Dirty Pop-Up may be the closest things fans will get to seeing the seminal boy band back together. At least, for now.

Although the band is reuniting *briefly* to accept their star on the Hollywood walk of fame, they have no plans to release or record any new music.

If you can’t make it out to LA to snag some of your own official *NSYNC merchandise, however, have no fear. As of April 30th (the day the band gets their star), all the merch will be available online on the band’s website.

Were you an *NSYNC fan? Let us know @BritandCo!

Kat Armstrong
Kat has been a writer, social media maven and mom for longer than she's willing to admit. She's also spent time in front of and behind the camera, interviewing celebs, politicians and acting as a producer for fashion and artistic photography shoots. When she isn't writing for various orgs and publications, she's hanging with her kids, husband and French Bulldog, Peter, in Toronto, Canada.
90s
Music
90s Nostalgia
More From Music