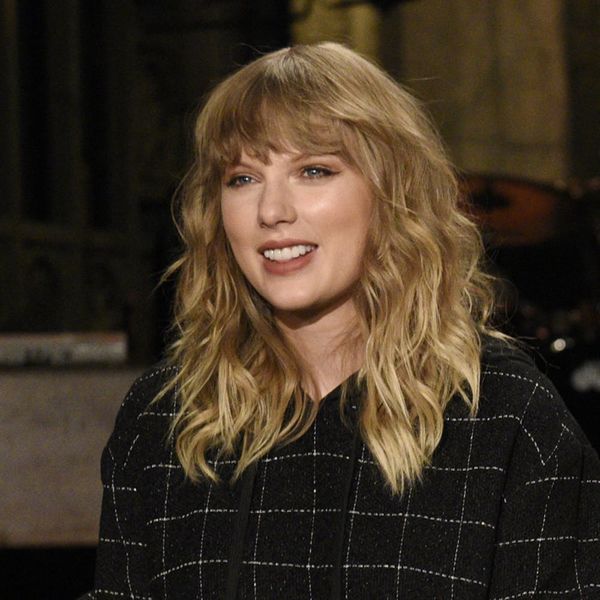 After a prolonged hiatus (three years, to be exact), Taylor Swift is back in the limelight thanks to the long-awaited release of her sixth studio album, Reputation. With just one performance in all of 2016, the pop star’s musical appearance on Saturday Night Live was HIGHLY anticipated, to say the least, and the 27-year-old did not disappoint, putting on a killer show that packed a serious punch, right down to her microphone.

Dressed in a black shorts and sweatshirt combo, the songstress looked plenty cool, but it was her shiny gold vocal accessory that stood out. Instead of a classic black or silver mic, Swift held a hugely bedazzled gold snake piece that seemed to slither up her hand throughout the entirety of her “… Ready for It?” act.

The snake has become a symbolic theme of the Grammy-winner’s album: Not only did she kick off early promotion for her latest release in the form of a slithering snake graphic (which most fans agree referenced the snake emoji-filled shade Kim Kardashian West threw her way following their infamous feud), but she later interwove the creature into her “Look What You Made Me Do” video with a room full of the hissing reptiles, plenty of snake-themed jewelry, and even a snake serving tea (!!).

This latest snake sighting had fans in a tizzy, with one Swifty going as far as to call her queen “straight savage.”

.@taylorswift13 singing into a bedazzled snake microphone is the level of extra I aspire to be #SNL pic.twitter.com/AcRaFyLUiz

Taylor’s snake mic is the only mic 🎤 🐍 #TaylorOnSNL #SNL

And it didn’t end there! When the pop starlet returned for her second performance during the 90-minute episode, she traded in her backup dancers for a guitar and the snake mic for one emblazoned with her album lyrics. Still, as she belted out a powerful acoustic version of “Call It What You Want,” fans couldn’t help but notice that serpents were still center stage, thanks to the Gucci sweater she donned featuring — you guessed it! — a giant snake.

It looks like 2017 just became the year of the snake, Chinese zodiac be darned!

What did you think of Tay’s appearance on SNL? Tweet us @BritandCo.