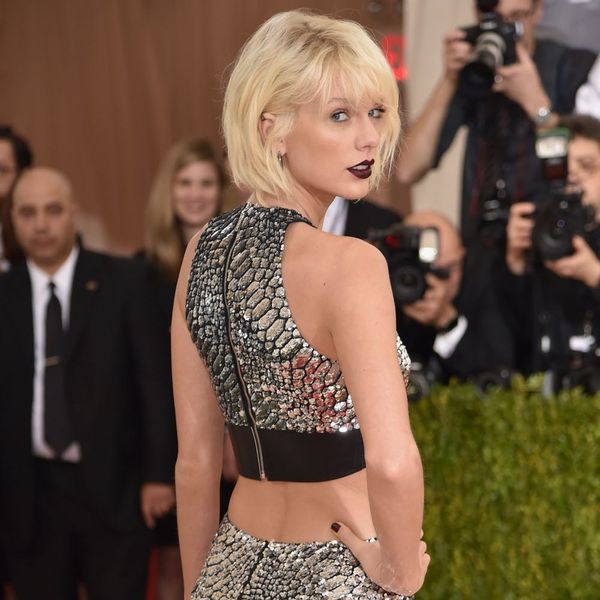 After releasing her new single “Look What You Made Me Do” late Thursday, Taylor Swift followed it up early Friday morning with a 15-second teaser of the official music video. There are snakes, there are swings — there’s a LOT going on in this short clip, so let’s take a look:

The clip starts with what looks like a car crash. After that, we get a flash of someone (presumably Swift) sitting and tapping her long, gold fingernails on a skull-laden throne — as a snake slithers up the side.

Then we see a close-up of a glammed-up Tay dramatically biting a diamond necklace (also, peep all those snake rings on her fingers — she’s selling them as merch!), before the clip flashes to Swift sitting on a giant swing that seems to be suspended from the ceiling.

Next, Swift is standing in an all-black fishnet outfit in front of a crew of midriff-baring backup dancers.

If you thought the video looked similar to her “Bad Blood” and “Blank Space” epics, you were right — the same director, Joseph Kahn, is behind “Look What You Made Me Do.”

“Brace for impact,” the teaser says before letting us know that the full video will premiere on Sunday, August 27 at the Katy Perry-hosted MTV VMAs.

What’s your favorite part of the “Look What You Made Me Do” video teaser? Let us know @BritandCo!