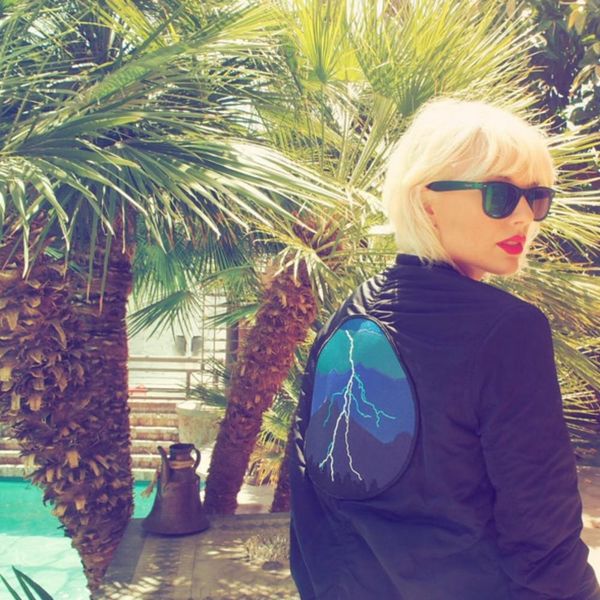 When Taylor Swift posted a pic of herself prepped and ready for Coachella with the caption “Bleachella,” we were all pretty focused on her new fabulously icy-blonde hair. But, did you happen to also notice that jacket? Sure, Tay is known for flaunting whatever fashion she chooses, but now it seems like there might be more to that jacket than just mere fashion. It seems like there might be A LOT more, and it might be a BIG hint about Taylor Swift’s (best-gift-ever-giving) boyfriend, Calvin Harris. Oooooh, it’s a mystery… but we have the clues you need to crack the code!

The jacket in question was a sleek black piece with a giant pic on the back featuring a scene of a forest, mountains and the sky split with a fork of lightning. Okay, innocent enough.

The intrepid tweeters over at Taylor Swift News (hats off to you, fine folks) noticed that Calvin has recently changed his Twitter avatar and background header to the very same image that was featured on Taylor’s jacket.

Taylor Swift and Calvin Harris are an absolutely adorable couple who totally support each other’s careers (like Taylor thanking Calvin in her acceptance speech while he watches her adoringly from the crowd, or Taylor watching Calvin on stage with total hearts in her eyes), and are totally the kind of couple who might do something like, oh, wear a jacket with their love’s newest album art on it to a major event in order to get the hype going. Yup, they surely would.

Calvin Harris probably has a new album on the way. Taylor is showing off his album art to create a buzz. Taylor and Calvin continue to be our current celebrity couple crush, and it’s not hard to see why.

Do you think Taylor’s jacket means something? Tweet us @BritandCo!