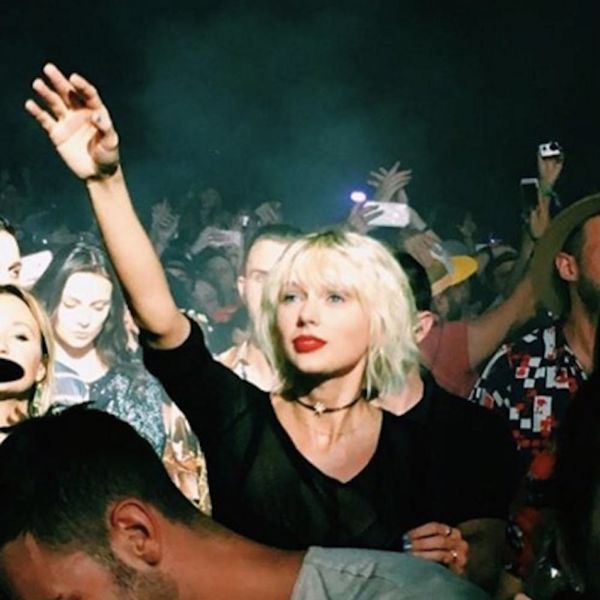 1. Ah, the look of love. Taylor Swift clearly had an amazing time at Coachella (even if she did at one point take a quick detour to go to her friend’s wedding), and her weekend highlight would most likely be watching her BF Calvin Harris perform (with Rihanna, natch). In the latest pic of her weekend, Taylor is absolutely lovestruck, proving herself not only Calvin’s girl, but obviously his biggest fan. “Watching @calvinharris like,” Swift captioned the pic, along with a heart eyes emoji. You ARE the heart eyes emoji, Taylor. (via @taylorswift)

2. Daisy Ridley shared an important message about self-esteem. No filter, no makeup, NO WAY. That’s the lesson Daisy Ridley wants people to keep in mind when getting yourselves into Instagram-fuelled funks — people’s lives are never as perfect as they seem. “Social media is great but also a bit scary cause what people post is the most filtered, most carefully chosen and cleverly edited moments of their lives,” she wrote. “And self esteem is a huge issue for people around the world.” The Star Wars star has fired back at body shaming trolls in the past, and reminds her fans that it’s all about balance. “But I actually do love myself, I try to think good thoughts always and am surrounded by the most wonderful people, so I’m keeping it balanced (like the Force, obvs).” Obvs! (via @daisyridley)

3. Kylie Jenner wore a shirt with Kylie Jenner on it because Kylie Jenner. Reason #1739487239842 the haters need to realize that these girls are funny and do not take themselves too seriously. (via @kyliejenner)

4. Lacey Chabert is relishing in sharing her first pregnancy with gal pals. Lacey, who announced her pregnancy with the cutest pic ever back in February, will soon be joining the new mom club, and as much as her and husband Dave Nehdar are trying to savor the whole experience, Lacey admits that it’s her girlfriends really getting her through. “It’s really nice to go through pregnancy with friends, because your body is just changing in so many ways and so many things are happening that cause concern,” Lacey told People. “To be able to turn to my friends and ask for advice has been really, really nice.” (via People, photo by Araya Diaz/Getty)

5. These sweaters were the hottest fashion at Coachella. Lol jk, these are just three teeny baby goats from Sunflower Farm who had to wear sweaters as the temperatures still hover around the freezing mark. BABY GOATS! IN SWEATERS!

6. Quote of the day: “Being real will attract real around you. Everyone is fake ’til you keep it real.” — Harry Hudson, aka Kylie Jenner’s BFF and muse, speaking on the Jenner sisters. (via Broadly)

What keeps you real? Let us know on Twitter at @BritandCo!