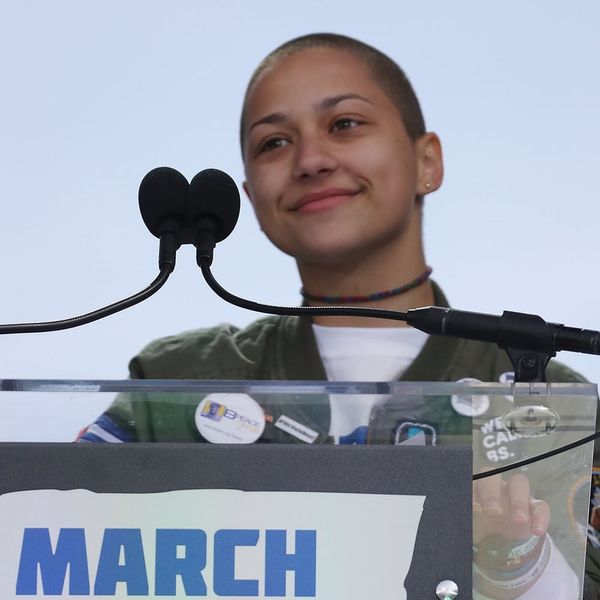 While the survivors of the shooting at Marjory Stoneman Douglas High School in Parkland, FL were marching for better gun control laws over the weekend, a gif went viral on Twitter and Facebook showing activist Emma González ripping up the constitution.

Many National Rifle Association supporters shared the clip with a negative comment about González, but the image is completely doctored and a perfect example of how fake news spreads.

Hours after posting the gif, its creators — the people behind the Libertarian-leaning social network, Gab — admitted that they purposely doctored the photo in an attempt to create a satirical viral image.

“This is obviously a parody/satire,” they tweeted. “You’re all mad because it’s believable, isn’t it? That’s the best type of satire. It’s a comedic reflection of reality.” Um, no.

Teen Vogue‘s Chief Content Officer, Phillip Picardi, pointed out that the pic was fake via his own Twitter account on Sunday, sharing the original photo of González alongside the doctored image.

“The fact that we even have to clarify this is proof of how democracy continues to be fractured by people who manipulate and fabricate the truth,” he said in the tweet.

“Satire” or not, the speed with which the image went viral among people who believed it to be true shows how easily fake news can infiltrate the digital space. According to CNN, the fake image was also released on notorious site 4Chan, an anonymous internet message board that has been behind real-world attacks on women, internet hoaxes, and pranks.

4Chan users have already been attempting to spread false information about González, her family, and have threatened to dox the teen and completely undermine her work as a gun reform activist.

Did you believe the image of Emma González was real? Let us know @BritandCo!