See How Kim Kardashian West, Miley Cyrus, and More Supported the March for Our Lives 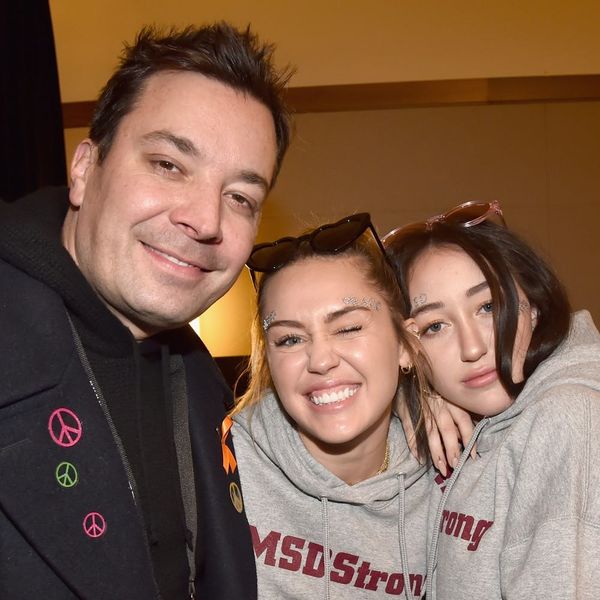 Last January, we witnessed history as hundreds of thousands of men and women marched on Washington to support women as they participated in the first annual Women’s March. Now, survivors of the recent Parkdale shooting at Marjory Stoneman Douglas High School are making history of their own, taking to the streets in cities around the world as they participate in the March for Our Lives to let lawmakers know, in no uncertain terms, that the safety of students and gun violence must become a priority. They certainly weren’t alone: The march is on track to become the biggest single-day protest in DC’s history, with teachers, students, parents, and plenty of celebrities lending their support to the cause: See who we spotted below!

TODAY I SAW THE FUTURE WITH MY OWN TWO EYES. #marchforourlives #neveragain

2. Miley Cyrus: The whole Cyrus clan showed up for the event (and in coordinating hoodies, no less!).

4. Jim Sturgess:Hard Sun star Sturgess snapped a pic of a young man joining in on a fight for the cause.

5. Lady Gaga: Mother Monster and her crew cheered from the downtown LA event.

7. Kat Dennings: Dennings shared a shot of an introverted protestor, pointing out that the cause was important enough for even those who don’t enjoy crowds to march.

8. Amal and George Clooney: The Clooneys were spotted among the growing crowds in Washington, DC. (Photo via Paul Morigi/Getty)

9. Demi Lovato: The “Sorry Not Sorry” singer shared her pipes with the masses. (Photo via Paul Morigi/Getty)

11. Alyssa Milano: Milano got her two kids involved, with her son, Milo, and daughter, Elizabella, holding up signs alongside their mommy.

12. Chelsea Handler: The comedian had one word for lawmakers in DC: “#Enough.”

13. Paris Jackson:Star actress Jackson zoomed in on a young protestor with a powerful message.

14. Amber Tamblyn: Tamblyn wore her support on her chest with a t-shirt repping for TIME’S UP and March for Our Lives.

15. Kim Kardashian West and Kanye West: The Wests took to the street to support youth in DC. (Photo via Paul Morigi/Getty)

17. Rose McGowan: McGowan represented in a March for Our Lives hoodie. (Photo via @rosemcgowan)

18. Carla Gugino: Gugino held her sign up loud and proud.

19. Ariana Grande: Grande, who was famously onstage when the Manchester bombing occurred back in May of 2017, took to the stage to perform for anti-violence protestors.

It’s not about the second amendment, it’s about children’s lives vs money in the NRA’s pocket. Enough. Is. Enough. @marchforourlives 💛 @everytown #notonemore #marchforourlives

20. Padma Lakshmi: The MAC spokesmodel made her views loud and clear with a sign reading, “Because love is a verb, and I love my child and yours.”

21. Jimmy Fallon: The funnyman posed with singers Miley and Noah Cyrus with a sign of peace.

23. Julianne Moore: Moore did her part while holding an unmistakable blue sign for change. (Photo via Kevin Mazur/Getty)

24. Sir Paul McCartney: The march hit close to home for the legendary Beatle, who told CNN, “One of my best friends [John Lennon] was killed in gun violence right around here, so it’s important to me.” (Photo via Eduardo Munoz Alvarez/Getty)

25. Busy Philipps: Philipps made the march a family affair, saying, “…We stand with you and are inspired by you. And we will continue to use our voices and our votes to bring real change.”

Tag us in all your best pics from the march @britandco!

Nicole Briese
Nicole is the weekend editor for Brit + Co who loves bringing you all the latest buzz. When she's not busy typing away into the wee hours, you can usually find her canoodling with her fur babies, rooting around in a bookstore, or rocking out at a concert of some sort (Guns N' Roses forever!). Check out all her latest musings and past work at nicolebjean.com.
Celebrities
Current Events
Celebrities Instagram Social Media