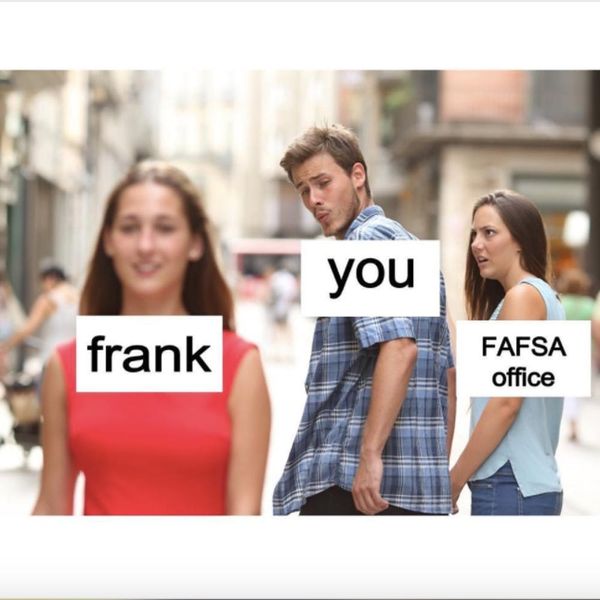 According to the Federal Reserve, student loan debt has reached $1.3 trillion at last count; the average student owes $32,731. This comes from a mixture of both private and federal loans, allowing students to finance their education, private and public schools alike. Federal loans are commonly disbursed through student loan service providers where they then accrue interest, adding further to the initial debt amount.

On top of this, the federal loan system is confusing and cumbersome for most students and their families. The Free Application for Federal Student Aid (or FAFSA) often requires hours of deciphering technical jargon. On top of this, financial aid is often unevenly and unfairly disbursed, privileging male students over female students. However, companies such as Frank and its 25-year-old founder Charlie Javice, have emerged to address and remedy that disparity.

But like why would you be loyal to the regular FAFSA once Frank walks into your life?

Part of Frank’s success is its user-friendliness and culture of inclusivity. Frank recently conducted its first data analysis, which reported that almost 68 percent of its 18,000 family consumers were women. Frank’s female clients reported household incomes of roughly $10,000 less than their male counterparts, and received an average of $1,500 less in financial aid than male students. According to Jarvice, this is because the FAFSA system is “an antiquated system… and its formula [for calculating aid] does not quite bridge the gap.”

As a result, female students end up saddled with more debt by the time they graduate — usually between $6,000 and $10,000 more than male students, says Jarvice. Because of structural disadvantages like the wage gap, women are already at a disadvantage when applying for financial aid, since the federal aid calculator doesn’t adequately address this income disparity; female students are then saddled with more debt as they attend school and then graduate, perpetuating a passive cycle of inequitable aid.

According to Javice, studies show that barriers such as a lack of information and access to resources impede students and their families from accessing financial aid. The most underprivileged areas have the least access to information regarding financial aid due to a host of factors such as overburdened college counselors and number of students in a school, says Javice.

Frank’s success in reaching the most under-resourced students in need of aid has been due to the company’s accelerated marketing efforts targeting lower income communities like Newark, New Jersey, and Broward County in southeast Florida. Frank also focuses on addressing the rural-urban divide, with one partnership involving the state of Louisiana.

“I’m Nicole, and I want to major in health science. I’m excited for college because I’ll get to study what I actually like.” -@nicoleafeliciano #Franksters #collegelife 📚

“Most [education technology] companies are based in mega districts or major metropolitan areas but they still have to reach rural areas,” says Javice. “We’re free and online, so we’re able to reach the most rural parts of the country… We’re helping graduate high school classes with 20 students. And that’s usually extremely unheard of when it comes to bringing innovation and bringing awareness.”

Another area in which Frank has succeeded in reaching underprivileged populations is in its user-friendly interface. Despite the prevalent use of smartphones in the country, “The FAFSA still requires you to use a computer, and have documents that are scanned or printed. You have to have online IRS accounts,” Javice says. Frank’s solution has been to provide a more streamlined and simple layout that’s easy to use on both mobile and computer devices. Frank staff are available for phone support as well.

The federal financial aid system itself can only be reformed via Congressional action through the Higher Education Reauthorization Act, meaning it will be at least a few years before reform policies can be implemented. For now, Frank is filling that void where few others have ventured. For helping students and their families navigate a system that hasn’t been updated since 1972, Frank is doing an excellent job.

Tell us about your student aid application experience @BritandCo!