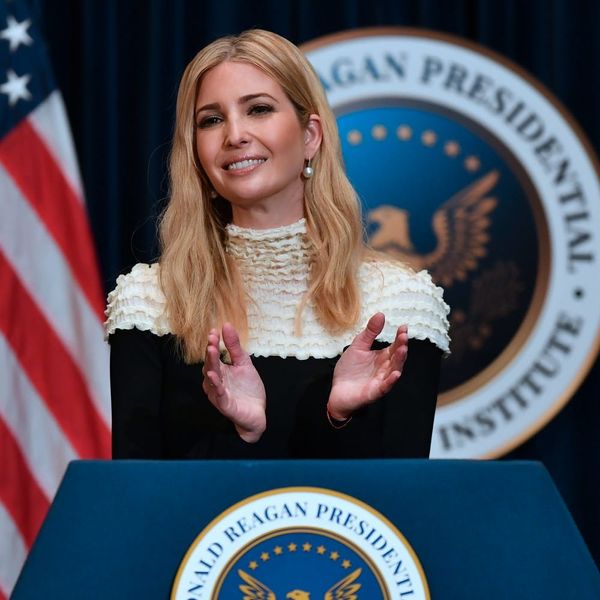 While some of us were enjoying our turkey comas this Thanksgiving, others were using the holiday as a means of protest. The founder of Nasty Gal clothing, Sophia Amoruso, noticed that first daughter Ivanka Trump was following her on Instagram this weekend and used the social sharing platform to send a message directly to the president’s daughter, who is also his close advisor, about her father’s repeal of DACA. A handful of other celebs did the same.

“Dear Ivanka,” the IG post reads. “I see you’re following me on Instagram. This Thanksgiving I would be grateful if you use the influence you have to advocate for a CLEAN Dream Act by December. Every day that passes without a clean Dream Act means anxiety and deportation for immigrant youth. 7,901 youth have already lost DACA and 122 more will lose it each day. Thank you and Happy Holidays.”

Other celebs like Cara Delevingne, Audrey Gelman, Amy Schumer, Sophia Bush, Alexa Chung, and Olivia Wilde all shared the same post, potentially reaching millions of people with the same message of unity — and, hopefully, catching the attention of their shared follower, Ivanka Trump.

The president announced in September that the GOP-led government would be removing DACA protections from DREAMers. DREAMers comprise nearly 800,000 undocumented immigrants who came to the US with their parents as children and went on to grow up as Americans; DACA protected them from deportation and allowed them to work legally in the country.

The “clean” Dream Act offers a path to citizenship for these same young undocumented Americans. The goal is to stop enforcing deportations and allow DREAMers who have graduated high school, earned a GED, or are on their way to completing one or the other, to move toward legal citizenship after growing up in the US.

With the ACLU petitioning for a bipartisan passing of a clean DREAM Act, and more people speaking out in favor of DREAM, the weekend’s Instagram appeal to Ivanka Trump marks yet another way of trying to get the president to listen to people’s concerns about rescinding the act.

Over the weekend, two senators suggested adding the changes to DACA into an end-of-year spending bill. Senators Dick Durbin (D) and Lindsey Graham (R) told CNN that with the many security issues both parties agree on, they should be able to reach a consensus on spending that would see the Clean DREAM Act added in as a line item alongside increased funding for frontline border security. The senators explained that protecting DREAMERs who are currently in the country while beefing up border wall security would make both parties happy.

They hope that the end-of-year spending bill is passed before the December 8 deadline.

Do you think that appealing to the First Daughter will help stop DACA from being pulled back? Tell us @BritandCo!