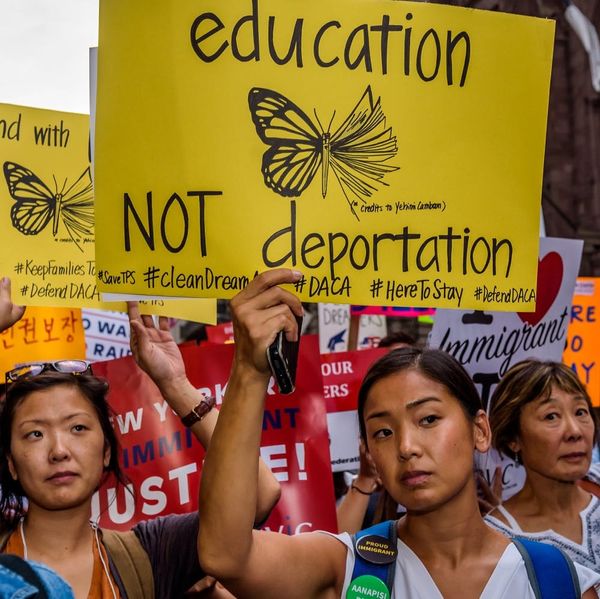 Last month, a bipartisan committee of senators, along with President Trump, reached something of a compromise on DACA and DREAMERs after a clandestine dinner at The White House. On that night, the president agreed to remove a request for more funding of a border wall while also protecting DACA, allowing them to stay in the country with a path to citizenship. On Sunday, however, the Trump administration released a list of hard-line immigration demands that may threaten the compromise — and the status — of nearly one million DACA recipients.

Delivered late Sunday to Congress, the administration’s new plan calls for border wall funding (rolling back a previous promise to the Dems that border security issues will not be attached to DACA), immediate immigration reform including a repeal and replace of DACA, and new funding for thousands of immigration enforcement jobs: 370 more immigration judges, 1,000 attorneys for the Immigration and Customs Enforcement agency, 300 federal prosecutors, and 10,000 additional ICE agents to enforce whatever laws the GOP plan to enact.

Besides the apparent 180 on the apparent compromises made last month, the list expects to further tighten legal immigration to the country, and an aide says the administration was, “not interested in granting a path to citizenship,” for DACA recipients.

White House aides further went on to tell reporters that the immigration reform demands outlined in Sunday’s plan were necessary to protect American workers, as well as overall public safety. The president has repeatedly claimed that illegal immigrants have more violent tendencies, something which has been proven to be false.

According to CNBC, the president’s list flies in the face of previous attempts at bipartisan cooperation when it comes to immigration, making any chance of an agreement between the parties dead in the water. In a joint statement, Democratic Senators Nancy Pelosi and Chuck Schumer slammed the 11th-hour list, saying, “The Administration can’t be serious about compromise or helping the Dreamers if they begin with a list that is anathema to the Dreamers, to the immigrant community and to the vast majority of Americans.”

“We told the President at our meeting that we were open to reasonable border security measures… but this list goes so far beyond what is reasonable. This proposal fails to represent any attempt at compromise,” the senators added.

Will you or your family be affected by sweeping immigration reform? Tell us @BritandCo.

Kat Armstrong
Kat has been a writer, social media maven and mom for longer than she's willing to admit. She's also spent time in front of and behind the camera, interviewing celebs, politicians and acting as a producer for fashion and artistic photography shoots. When she isn't writing for various orgs and publications, she's hanging with her kids, husband and French Bulldog, Peter, in Toronto, Canada.
Immigration
Current Events
Immigration Politics