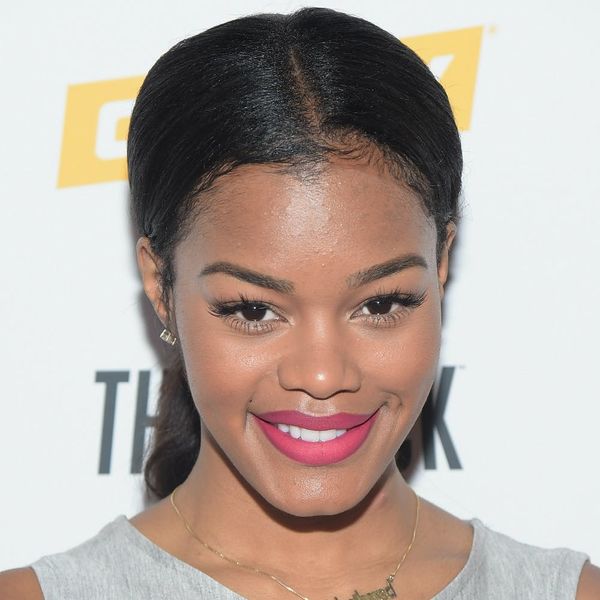 While the world watched with bated breath, Kanye West took the stage to do… whatever he felt like — for four minutes straight. *Gulp!* On the heels of a MASSIVE feud with Taylor Swift, who was noticeably absent from this year’s awards, we didn’t know WHAT to expect, but we were all pretty certain that fireworks would be happening.

Yet, despite a few mild-mannered jokes (“I see you, Amber!” he said in a shout-out to his ex) and a brief explanation of his now-infamous “Famous” video (“The audacity to put Anna Wintour next to Donald Trump… I put Ray J. in there, bro!”), Kanye kept things pretty tame, leaving the focus on his NEW video, “Fade.”

Though FAR less controversial than the one before it, the video quickly had people buzzing, as a woman named Teyana Taylor did her best Flashdance impression for the camera, showing off her SERIOUSLY fit body in the process.

But who is Kanye’s new mystery muse? You’ve probably seen her before, even if you don’t know it.

Here’s what we know: She actually made her debut into the limelight via MTV at just 16 years old, when she was featured on an episode of the network’s My Super Sweet Sixteen (and no, we’re not kidding!)

A singer and actress in her own right, she was originally signed to Pharell Williams’ label, Star Trek, back around the same time in 2007, and though she released a few singles (“Google Me”) on her own and had a brief stint with a band called U.G.L.Y., her most notable role was as — wouldn’t you know it! — a backup dancer in Jay-Z’s “Blue Magic.”

From there, she took on roles in films such as Stomp the Yard and Stomp the Yard 2: Homecoming and Madea’s Big Happy Family, but not before striking up a friendship and working relationship with Kanye — in fact, her vocals appear on a few tracks of My Beautiful Dark Twisted Fantasy.

She made the switch to Kanye’s GOOD Music and Def Jam entertainment label back in 2012, and the rest, as they say, is history: She’s currently gearing up for the release of her upcoming second album on the label. In the meantime (you know, while you’re waiting to relive all those INSANE dance moves when Kanye’s vid hits VEVO (truly speechless)), you can check out her new single “Freak On,” featuring Chris Brown below.

Were you mesmerized by Teyana’s killer dance moves? Share with us over @BritandCo!

Nicole Briese
Nicole is the weekend editor for Brit + Co who loves bringing you all the latest buzz. When she's not busy typing away into the wee hours, you can usually find her canoodling with her fur babies, rooting around in a bookstore, or rocking out at a concert of some sort (Guns N' Roses forever!). Check out all her latest musings and past work at nicolebjean.com.
Music
Entertainment
Music VMAs
More From Entertainment