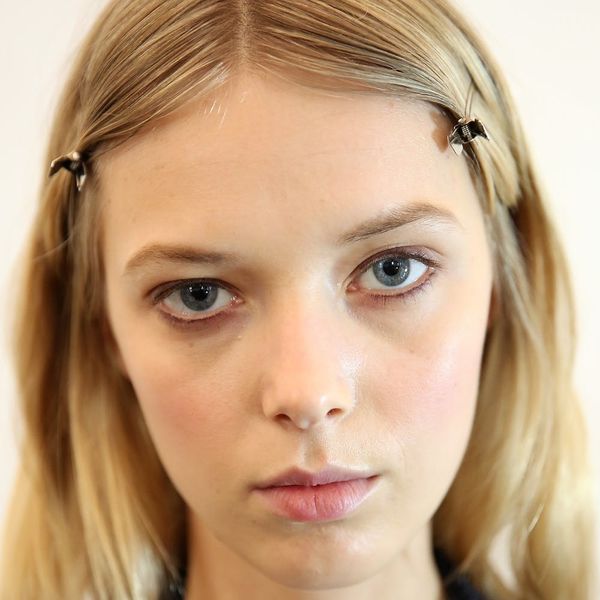 Body positivity has been having a major moment in recent years: We saw Michael Kors put his first plus-size model on the runway, the launch of a body-positive Barbie, and inclusive lingerie all but taking over our feeds.

But we’ve yet to completely solve our deep-seated issues with self-image, as UK model Ulrikke Hoyer just proved when she was fired from walking in a Louis Vuitton fashion show for allegedly being “too big.”

I just returned from Tokyo/Japan, where Louis Vuitton held a beautiful cruise show in Kyoto, I just never made it to Kyoto cause I was canceled for the show due to being ‘too big’. (I’m a size 34-36) Ashley Brokaw’s caster Alexia had said that there had been some problems during the fitting. According to her I had “a very bloated stomach”, “bloated face”, and urged me to starve myself with this statement “Ulrikke needs to drink only water for the next 24 hours”. I was shocked when I heard it. I woke up at 2am and was extremely hungry. The breakfast started at 6:30am – I had the absolute minimum. I was afraid to meet Alexia so my luck she didn’t arrive until 8am, when my plate was taken off the table. She said good morning to me and the other girls and looked at me, then down on my non-existent plate and up at me again. She was checking if I had been eating food. At 7pm my mother agent from Denmark called my to tell the sad news that Louis Vuitton had chosen to cancel me from the show without the refitting and that I was going to be sent back home. Not only did I have a belly, my face was puffy now also my back was a problem. I am glad I’m 20 years old with an elite sports background and not a 15 year old girl, who are new to this and unsure about herself, because I have no doubt that I would then have ended up very sick and scarred long into my adult life. TO READ THE FULL STORY CLICK IN MY BIO!!!!!!! #LVCruise2018 #mistreatmentofmodels #AshleyBrokaw #thefutureisfemale #sowhyeatingdisorders #youknowitstrue #shareifyoucare #jamespscully

Hoyer explained the sitch in her own words over on social media, posting a photo of her slim frame along with the words, “Too fat for Louis Vuitton!” The model says that she had just returned from what was meant to be a “beautiful cruise show” in Kyoto, Japan as “I was canceled for the show due to being ‘too big.’ (I’m a size 34-36).” (For all you stateside ladies, that equates to a size two — a friggin’ two!)

According to Hoyer, the brand’s casting director’s assistant, Alexia Cheval, fired the model for having “a very bloated stomach, bloated face,” and “urged [her] to starve [herself]” by saying, “Ulrikke needs to drink only water for the next 24 hours.”

Cheval’s wording comes from a direct email she sent to Hoyer’s Paris agent, Arnaud Daian, which read, “Nicolas [Ghesquiére] was aware she was a 92 [hip] and fit her in a dress where hips were hidden. She came yesterday in Tokyo to do her final fitting, and she doesn’t fit the exact same dress anymore. She has a belly, her face is more puffy, and the back of her dress is open and you can see it is tight.”

In her post, Hoyer goes on to describe how Cheval showed up at mealtime to ensure that she didn’t eat after her initial fitting, though she wasn’t given the opportunity for a second. “Not only did I have a belly; my face was puffy now also my back was a problem.”

Cheval’s boss, Ashley Brokaw (who says she’s received death threats over the incident), claimed the whole thing was a big misunderstanding to Business of Fashion, saying, “[Hoyer] came to Paris, we made a fur coat to her measurements, to her body, and we confirmed her for the show. Two weeks later, in Tokyo, for whatever reason she came in for her fitting, and the coat didn’t fit properly. We didn’t have the atelier to remake anything and we didn’t have a lot of other options to try on her, although we did try some other things on her and nothing quite worked. So it was a situation that was devastating all around.”

The casting director was also adamant that Hoyer, who has posed for the likes of Vogue and walked for top brands such as Stella McCartney and Chloé, got it wrong about her eating instructions, saying that she was instructed to drink only water instead of other drinks such as Coke or alcohol, and that at no time was she instructed not to eat.

But Hoyer isn’t buying it. She told the publication that she had actually lost weight prior to her Tokyo fitting, and that she’s spoken to “hundreds of other models” that have reached out since she shared her story, telling her they received the same treatment from Brokaw herself.

Whatever the explanation, the experience was infuriating for the model, not only for herself, but for younger girls in the industry. “I’m glad I’m 20 years old with an elite background and not a 15-year-old girl, who [is] new to this and unsure about herself, because I have no doubt that I would then have ended up very sick and scarred long into my adult life,” she wrote.

As she told BOF, for her, it’s not about the cancelled show, but ending size discrimination. “It’s more about speaking out about these huge problems that are in the industry and some of the really big high-end fashion houses that are part of the problem,” she said.

What do you think about Ulrikke’s story? Share with us @BritandCo.