For Pride Month, Tinder Is Giving One LGBTQ+ Couple a Dream Wedding 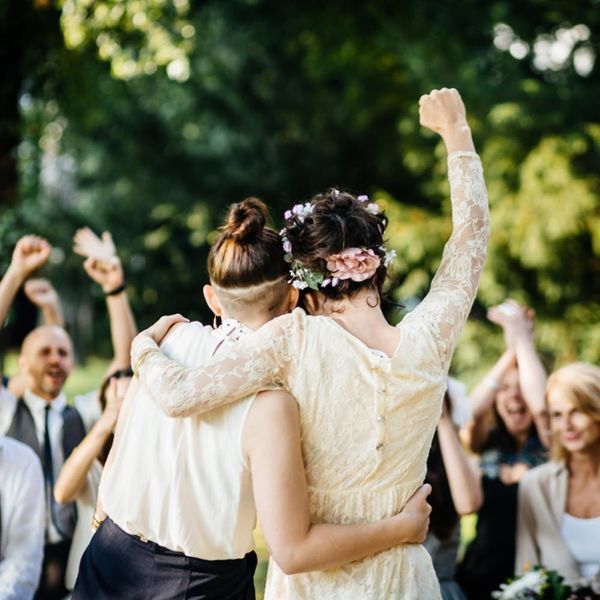 June is Pride Month, and if you thought that thematic rainbow merch, McDonald’s rainbow-boxed French fries, and outrageous parades were the key to the festivities, we’re here to suggest that perhaps our observance of the occasion go a little deeper (even though those fries are delish and the parades are obviously pretty awesome). As we celebrate alongside the LGBTQ+ community this month, we should also take a moment to step back and consider how our communities have evolved to better serve the needs and dreams of our lesbian, gay, bisexual, and transgender friends. One such community to consider is the world of online dating. Are the apps and sites that so many of us love to hate becoming warmer, friendlier, safer places for LGBTQ+ folks?

In celebration of Pride Month, Tinder — which, ICYMI, made headlines in late 2016 by debuting all-inclusive gender options for singles — recently shared the results of its LGBTQ+ Dating Survey. Tinder’s research is based on a nationally representative study of over 12,000 Tinder users: a sample that included 284 nonbinary users, 8,916 heterosexual men, 712 gay men, 311 lesbian women, and 1,847 heterosexual women. The survey was distributed in May 2017, and it revealed that, while our society has made great strides toward equality, there is still progress to be made when it comes to dating, both on- and offline.

Tinder’s sociologist Dr. Jess Carbino notes that, according to the LGBTQ+ Dating Survey results, safety remains a primary concern. “We learned that gay male users are 31. 2 percent more likely than their cisgender male counterparts to feel unsafe showing affection publicly,” she shares. To be even more specific, according to the results of Tinder’s research, more than one in five lesbian women and over 40 percent of gay men say they don’t engage in PDA because they fear for their safety.

Dr. Carbino hopes that Tinder’s ongoing efforts to show support for the LGBTQ+ community — particularly by making it easier for users to describe themselves in a way that makes them feel comfortable and authentic — will help chip away at these deeper discrepancies in the dating world. “With a strong understanding of these challenges, Tinder has made it a priority to connect our LGBTQ+ users with the platform to safely and openly make connections, explore their preferences, and self-identify any way they want with 37 gender options,” she reveals.

While Tinder continues to do its part to make online dating platforms a safe and comfortable place for LGBTQ+ singles, user success stories indicate that significant progress has already been made. Missy Bynon met her now-fiancée Julianne on Tinder in March 2015 after four long months of swiping left and right. The two were engaged several months later and will get married this October at the site of their very first date. Bynon is hopeful that others in the LGBTQ+ community will find similar happily-ever-afters online — and she has reason to be. “Based on conversations with friends, I believe LGBTQ+ people are becoming more comfortable and confident finding love online,” Bynon notes. “The key is to weed out the ‘hook-up’ sites and/or profiles from the ‘looking for a relationship’ profiles. As we get older, it is harder to meet single people. Online dating opens up an opportunity that we would not have otherwise. I know for a fact I would have never met my fiancée if it weren’t for online dating.” (Photo via Missy Bynon)

Tinder’s numbers demonstrate a similar optimism. More than half of the app’s LGBTQ+ users believe that the platform will lead to a long-term relationship, and gay men and lesbian women are just as likely as their heterosexual counterparts to believe love is possible on Tinder. These results “actually did not surprise me,” Dr. Carbino admits. “Over the past several years, we’ve conducted many focus groups with members of the LGBTQ+ community, and I’ve come to learn that Tinder is seen as the app for LGBTQ+ singles seeking a meaningful relationship.”

To keep our hopes for romance — and our Pride celebrations — going strong, Tinder is running a #TinderSuccessStory contest throughout the rest of June. One lucky couple will win $100,000 toward their dream wedding. To enter, grab your bae, post a #couplespic to Insta using the #TinderSuccessStory hashtag, tag @tinder, and share your love story in the caption. The winners will be announced on July 5.

What dating apps have helped you find love? Tweet us @BritandCo!

Alli Hoff Kosik
Alli Hoff Kosik is a freelance writer who is passionate about reading, running, rainbow sprinkles, her lipstick collection, watching embarrassing reality TV, and drinking pink wine. She lives in Brooklyn with her husband and (in her dreams, at least) three golden retriever puppies. Listen to her talk books on The SSR Podcast.
Dating
Relationships
Dating LGBTQ love study
More From Relationships