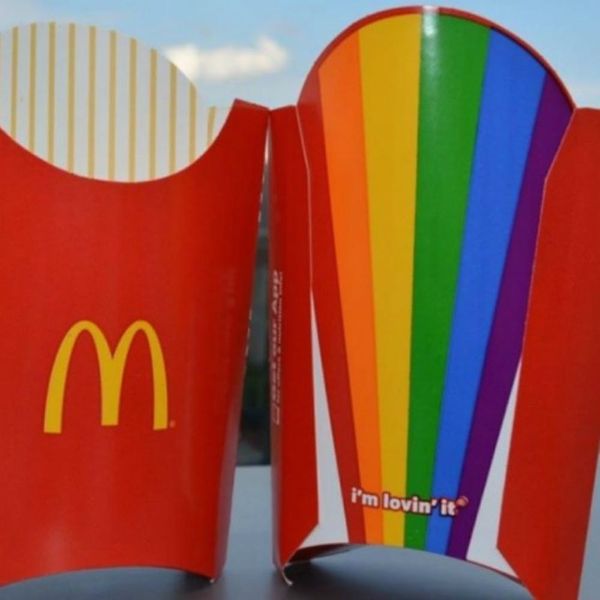 Rainbow food has been having its moment for what seems like an eternity, and McDonald’s is getting on board in their own way, with an LGBTQ+ French fry box that’s a technicolor dream. So even if you don’t want to eat the rainbow, you can still support pride.

Join us in supporting #Pride2017 and the #LGBTQ community. All month, our large fries are served in a limited edition rainbow fry box. pic.twitter.com/I4p0IQqFh8

Available at McDonald’s restaurants in the San Francisco Bay area, the rainbow French fry boxes were created to promote the chain’s sponsorship of pride events in SF and Washington DC. “The rainbow fry boxes are a fun way to show our support of the LGBTQ community using one of McDonald’s most iconic and recognizable items,” McDonald’s PRIDE Network founder, Cathy Martin, said.

The chain has always supported diversity both in their employment and support of Pride events, but this is the first time they’ve taken it further. “As an official sponsor of this year’s Pride festivities, we looked for a unique way to bring that celebration into our restaurants throughout the Greater Bay Area,” said spokesman Kim Knapp.

With the initiative only happening in SF this year, we hope that the company will consider rolling rainbow fry boxes out across the country for Pride 2018. With companies like Equinox and American Eagle Outfitters supporting LGBTQ+ rights, it’s great to see that companies aren’t afraid to show their pride and respect for diversity.

Kat Armstrong
Kat has been a writer, social media maven and mom for longer than she's willing to admit. She's also spent time in front of and behind the camera, interviewing celebs, politicians and acting as a producer for fashion and artistic photography shoots. When she isn't writing for various orgs and publications, she's hanging with her kids, husband and French Bulldog, Peter, in Toronto, Canada.
Fast Food
Food News
Fast Food LGBTQ
The Conversation
Reviews:
More From Food News