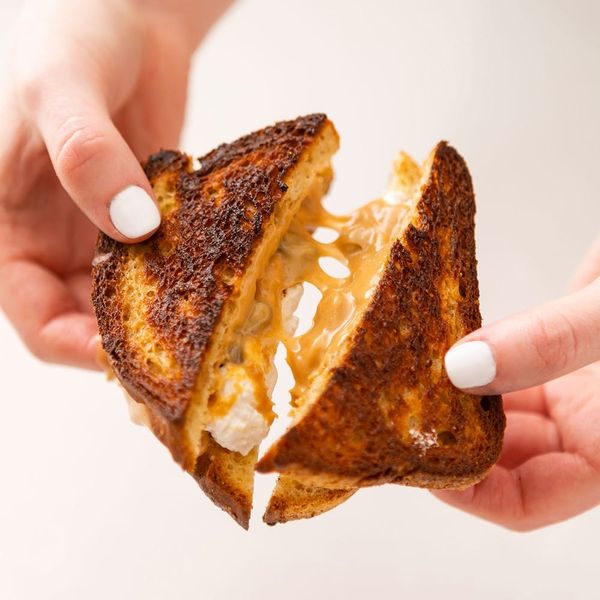 For those of us growing up in the ’90s, a fluffernutter sandwich, or peanut butter and marshmallow fluff sandwiched between two slices of white bread, was the lunch to have. We have long reminisced about it (and still swoon over marshmallow desserts). However, we realize it may not be within our current dietary guidelines what with all the refined sugar and flour. So, we thought it was due time to make a heathified, adult version of it (with a surprise chocolate add-on).

Our epic sandwich begins with a recipe for semi-homemade vegan marshmallow fluff featuring vegan Dandies Marshmallows, a tapioca-based mallow that rivels Jet-Puffed, and aquafaba, the brine drained off from a can of chickpeas. Because we’re all about letting everyone, no matter their dietary restrictions, eat happy, we opted for one of our favorite gluten-free breads (it honestly tastes better than regular bread). Though the traditional fluffernutter is eaten at room temp, we wanted to go the extra mile by pan-toasting it like a grilled cheese.

To crisp up the bread, we generously slathered Myoko’s Cultured Vegan Butter on the outside of the slices. Organic peanut butter (which can be subbed for other butters) and a smattering of chocolate chips melt on top of one side of the bread, while the mallow fluff oozes on the other half. Smack ’em together, and prepare yourself for a sandwich so good, you’ll probably eat two… at least, we did!

Recipe Notes: To yield smooth fluff, be sure the marshmallows fully melt before integrating them in the aquafaba. When you add them to the batch, be sure your mixer is on a high speed and add the melted marshmallow in one go. Otherwise, the remaining marshmallow in the bowl may cool and harden and therefore create lumps in your fluff. Do not keep this fluff out at room temperature for very long, otherwise it will begin to break down and look clumpy.

1. In a stand mixer whip aquafaba until fluffy peaks form in the meringue.

2. Meanwhile, in a microwave safe bowl combine coconut oil and marshmallows. In 30-second intervals, giving a quick stir between each, microwave until marshmallows have fully melted.

3. Add marshmallow mixture into the stand mixer with the meringue and whip together until smooth.

4. Store in an air tight container in the fridge for up to 5 days.

Recipe Notes: Use whatever bread, butter, chocolate, and nut butter speaks to you. We simply wanted to showcase some of our favorites, but this recipe will certainly taste incredible with whatever you have on hand.

1. Heat a skillet on medium-high heat.

2. Butter one side of two pieces of bread. Make sure you butter the opposite sides so they will sandwich nicely together.

3. Place the bread, butter-side down onto skillet, and allow them to toast for a few minutes.

4. Working quickly, add a dollop of marshmallow fluff to one piece of bread and a spoonful of peanut butter and chocolate chips to the other side. Leave a little space around the edges of the bread, so as the toppings melt, they have room to expand.

5. Using a spatula, carefully flip one piece of bread onto the other to form a sandwich.

6. Remove from heat and cut in half, diagonally. Serve immediately.