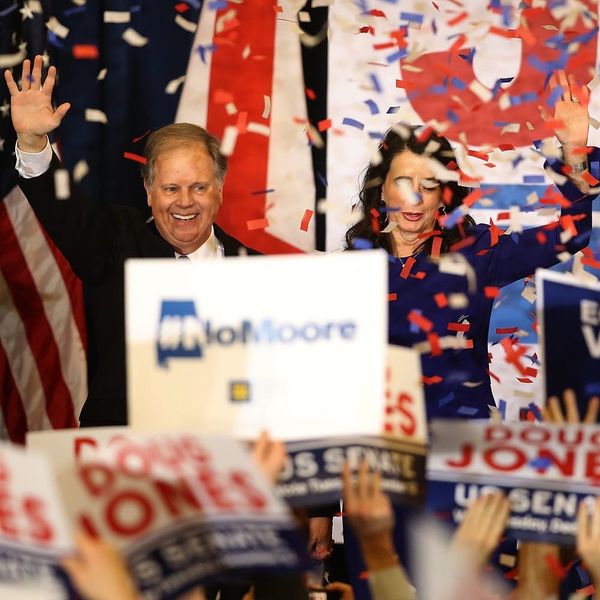 As you’ve probably heard by now, Democrat Doug Jones narrowly beat Republican candidate Roy Moore in yesterday’s special Senate election in Alabama. Amid damning accusations against Moore of sexual misconduct with teenage girls, some may have expected Jones’ victory to be a shoo-in. But it wasn’t.

Jones’ slim 51 to 49 win was due to Black voters in the state — a group who have been systematically forced away from the polls. This detail is one that shouldn’t be ignored.

During yesterday’s vote, there were widespread reports of purposeful voter misdirection (put another way, voter suppression) in the state. GOP lawmakers passed a bill in 2011 that requires all voters to present photo ID at the polls, which, combined with the recent closure of nearly all DMV offices in Democrat-leaning counties with large Black populations, has led many to question whether this election was exactly fair. But Black voters who could get out and vote did. And even with the obstacles placed in their way, Black voters in Alabama voted overwhelmingly for Jones.

Exit poll numbers in the state show that 60 percent of those who did vote were white, and the other 30 percent were Black. Somewhat disappointingly, 74 percent of male white voters cast their ballots in favor of Moore, and 63 percent of white women, too.

When a candidate has multiple damning child predation allegations against him (not to mention a chilling track record on LGBTQ+ rights and history of anti-semitism) but is still voted for by the majority of one demographic, it’s hard not to wonder how people make their voting choices. But some said they’d made up their minds before child sexual predation allegations were levied against Moore.

Black people make up 26 percent of the entire population of the state, turning out for Tuesday’s election in bigger numbers than even during Barack Obama’s 2012 reelection campaign, according to CNN‘S exit polls from both elections.

As of 11:20 AM EST, the day after the election, Moore has yet to concede, even though it’s clear that the candidate has lost. Saying he would be, “waiting for God” to help him see through, due to the close numbers, GOP lawmakers have made it clear that they do accept the loss, including President Trump.

Roy Moore won’t concede; says will wait on God to speak. God wasn’t registered to vote in AL but the ppl who voted did speak and it wasn’t close enough for recount. In elections everyone does NOT get a trophy. I know first hand but it’s best to exit with class.

Alabama Secretary of State John Merrill: “The people of Alabama have spoken tonight, they have made their voice heard loud and clear” https://t.co/ABx2fLp14B https://t.co/Aww99p9LGT

Congratulations to Doug Jones on a hard fought victory. The write-in votes played a very big factor, but a win is a win. The people of Alabama are great, and the Republicans will have another shot at this seat in a very short period of time. It never ends!

Jones is the first Democratic senator in the state in 25 years, and will be working with a mostly-Republican elected government going forward.

What do you think of Doug Jones’ Alabama win? Tell us @BritandCo!