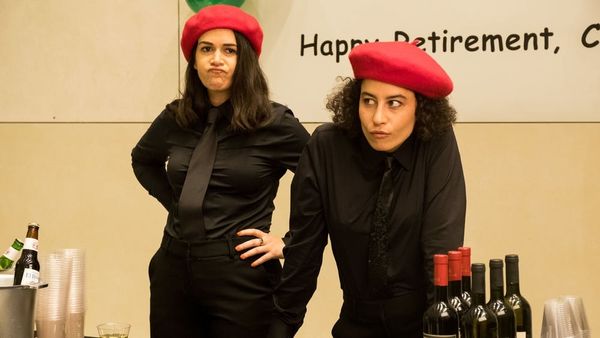 Welcome to Brit + Co’s Weekly Entertainment Planner! Each Monday, we highlight one thing we’re excited about in six categories — movies, TV, music, streaming services, podcasts, and a bonus pick from all of the above — to help you navigate your week in watching and listening. Check out our picks for the week of March 25 to 31 below. Your eyes and your ears will thank us!

Dumbo (March 28): Disney’s newest reboot is the Tim Burton-directed Dumbo, a live-action and CGI remake of the 1941 animated classic. Based on early trailers, it looks like the updated film will be just as emotional as the original, so bring all your tissues. Colin Farrell, Nico Parker, Finley Hobbins, and Michael Keaton star. (Photo via Walt Disney Studios)

Abby’s (March 28): Fans of Parks and Recreation and The Good Place, pay attention: Creator/producer Mike Schur has a new show starring Natalie Morales (Santa Clarita Diet) as Abby, the owner of a backyard bar where cell phones are banned and regulars are treated like royalty. Watch the premiere this Thursday, March 28, at 9:30pm ET on NBC. (Photo via Ron Batzdorff/NBC)

Santa Clarita Diet Season 3 (March 29): Drew Barrymore and Timothy Olyphant return as Joel and Sheila Hammond, husband-and-wife realtors whose lives are forever changed when Sheila seemingly contracts a zombie virus and starts eating people. The trailers for season 3 have hinted at escalating tensions and an ominous “til death do us part” angle — but we’ll have to watch on Netflix on Friday, March 29, to find out who is at risk this time. (Photo via Saeed Adyani/Netflix)

Sisteria: This show about “women and non-binary creatives’ experiences as creators and consumers of arts and culture” is different from your standard pop-culture podcasts (which we also love, of course). Hosts Stephanie van Schilt and Veronica Sullivan and a variety of experienced and interesting guests cover everything from making a living as a creative to how to get started on projects, and lots more. Listen online, or subscribe wherever you get your podcasts.

Broad City series finale (March 28):Broad City creators and stars Abbi Jacobson and Ilana Glazer recently revealed that they wept while filming the last scene for their groundbreaking comedy series, and chances are good that we’ll be doing the same when the finale airs on Comedy Central on Thursday, March 28. Yas forever, queens. (Photo via Jon Pack/Comedy Central)