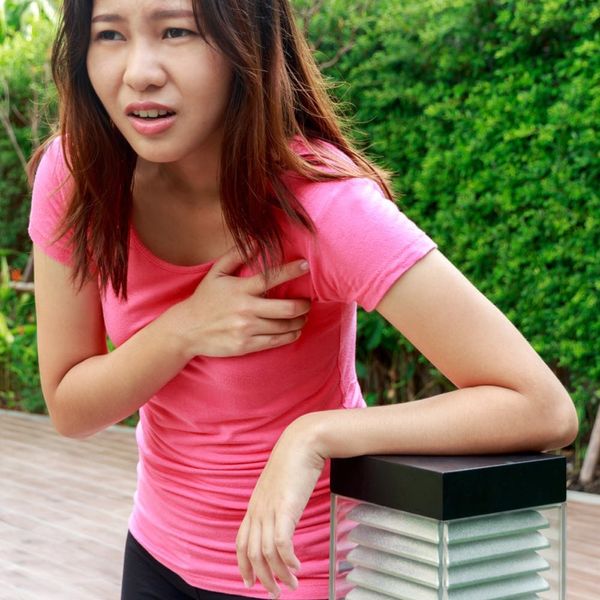 A sweaty-palmed, tight-chested, nausea-inducing episode is never easy to handle. It may be the very first time you’re experiencing the symptoms or it may be the hundredth, and it may have a number of different causes (or be brought on without warning at all). Now more than ever, it’s important to have a candid conversation about mental health and what triggers changes in it. However your anxiety manifests, you may lean on meditation apps, stress-relieving exercise, or a significant other to help you cope — but when should you seek more dedicated medical attention? We spoke to clinical psychologists about how to spot the warning signs of a panic attack, how your body responds, and how to make it through.

According to the Anxiety and Depression Association of America, six million Americans suffer from panic disorder (with women affected at twice the rate of men), which is characterized by frequent and often unexpected panic attacks, and over three percent of the population experiences general anxiety disorder, which can also include panic attacks. Yet statistics show that fewer than half of those afflicted actually seek medical attention. If you suspect you’re silently suffering from panic attacks or unresolved anxiety, it’s time to evaluate.

First, get to know the symptoms of a panic attack. “It typically includes physical reactions such as a pounding heart, shortness of breath, chest pain, sweaty palms, trembling, dizziness, numbness or tingling in arms or legs, and upset stomach,” explains Dr. Adrienne Meier, a clinical psychologist practicing in both New York City and Los Angeles. Though the reaction may seem to last for hours when you’re experiencing it, and it may make you feel like you’re having a heart attack or dying, the actual attack doesn’t usually go on for more than 10 minutes, Dr. Meier says.

While there may be no apparent trigger for this overwhelming feeling of panic, especially for those with panic disorder, it’s the body’s way of defending itself against what it detects as some sort of sensory danger. “The amygdala, which is the part of our brain that regulates fear and anxiety, starts this automatic ‘fight or flight’ response when there is a perceived threat,” explains Dr. Meier, “and it sends signals throughout the body to cause these physical sensations.” Then, in many cases, the feeling causes the body to stop in its tracks, leaving the person unable to function properly. “Since this is a primitive, emotional reaction meant to protect us, it overrides our ability to think rationally.”

Most people experience some form of anxiety at one time or another, whether the stress is coming from work, home, society, or personal relationships, but it’s important to recognize what separates typical anxiety from full-blown panic. The difference is that isolated moments of anxiety often have to do with a worry over something that hasn’t happened yet, whereas panic attacks seem to occur more out of the blue, says Dr. Lindsay Trent — a Stanford University psychologist and co-founder of Basis, a site and app that allows users to consult mental health specialists for same-day virtual counseling sessions. “The onset of anxiety is gradual, as compared to panic, and may wax and wane over time. In contrast, a panic attack is associated with an abrupt onset of intense fear in the ‘here and now,’” she clarifies.

If you’re prone to panic attacks, experts say familiarizing yourself with the warning signs can help you better handle them once they occur. “The key to decreasing the symptoms of a panic attack is identifying what happens just before a panic attack starts; for example, a person may start to sweat just prior to a full-blown panic attack,” says Dr. Stacie Freudenberg, a licensed clinical therapist. Or it could begin with a general feeling of uneasiness caused by an uncomfortable or dangerous situation — or could come seemingly completely out of nowhere. Regardless, psychologists say, listen to your gut, and you will better be able to make it through to the other side of the panic attack.

There are instinctive ways you can train your body to work through the feelings of panic. The most natural way that many experts suggest is breathing techniques — which should be practiced regularly, so you can implement them in moments of need. “My favorite go-to breathing exercise is called 4-7-8 breathing,” says Dr. Robert Duff, a clinical psychologist. “You breathe in for four counts (faster or slower than a second depending on your comfort), hold for seven, and then exhale for eight. A good regimen is to practice three times per week for about 10 minutes, during times when you are not already super-anxious.”

When you’re in public and feel the onset of a panic attack, the most effective strategy could be to move around, says clinical psychologist Dr. Giulia Suro. “Our instinct may be to isolate during a panic attack so no one sees what is happening, but if you can, get outside and take a walk around the block; or if that’s not possible, even take stroll around a mall, or walk in circles wherever you are,” she says, to help you ground yourself and get out of your own head. And you may want to literally cool down — Dr. Suro suggests downing a glass of ice water or holding an ice cube in your hands to help panic subside. “The most important thing to keep in mind is that no experience of panic will last forever.” With any combination of these panic-erasing techniques, she says it may also help to have a go-to mantra to coach yourself through, like “this shall pass,” “it’s almost over,” or “I will feel calm again.”

Above all, Dr. Trent emphasizes the importance of knowing when to speak with a counselor or other mental health professional to evaluate whether anti-anxiety medication or other measures might be necessary. “If panic attacks are interfering at work, home, and/or relationships, or if they’re causing severe distress, then it might be time to seek professional help.” She also encourages paying attention to your body always, because panic attacks can sometimes be confused for heart conditions, which may have similar symptoms. You know your own mental health better than anyone else, so it’s crucial to keep tabs on it as you would any other aspect of your health.

How do you cope with anxiety and panic disorders in your daily life? Tell us your story on Twitter @BritandCo.

Mara Santilli
Mara Santilli is a freelance writer based in New England. Her work has appeared in several publications, including Shape and Marie Claire. When she isn't writing, she can be found munching on any piece of dark chocolate she can get her hands on, plunking out her favorite acoustic songs on the guitar, and finding the cheapest Broadway tickets possible. Follow her adventures on Instagram to see where she's headed next.
Healthy Living
Health
Healthy Living Mental Health Science Self Care
More From Health