Everything You Need to Know About Dealing With Eczema 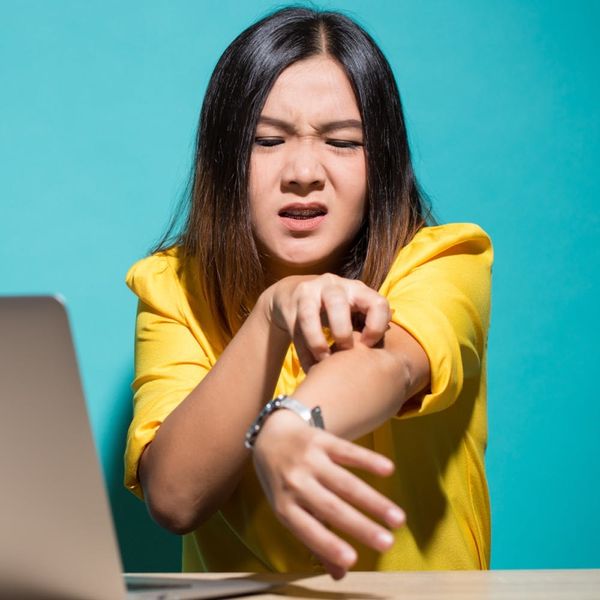 Dry, flaky skin is a common side effect of cold weather; but while we often refer to any form as “eczema,” those who actually have this condition will tell you it can be so much worse than the occasional rash. Here’s what eczema really is — and how you can treat it.

Although we commonly use the word eczema to refer to “a group of conditions that cause irritation of the skin,” says Dr. Samuel Malloy, MD, the medical director of online pharmacy Medzino, “it is also the term used to describe the most common type of eczema — atopic dermatitis. Though eczema can occur on any part of the body, it is most commonly found on the hands, insides of the elbows, backs of the knees, the face, and the scalp. Symptoms tend to flare up periodically, with skin becoming itchy, dry, cracked, sore and red. In more severe cases, patients can experience widespread inflammation and red skin all over the body.”

If you’re reading this and don’t already have eczema, chances are you won’t get it. “The large majority of patients who develop eczema develop the disease by the time they are five years old,” explains Dr. Kathleen Dass, MD, an allergist immunologist who owns Michigan Allergy, Asthma, & Immunology Center in Oak Park, MI. One of the interesting — and unfortunate — traits of eczema is that it often develops as part of “the atopic triad,” a triptych of conditions. “Some people go through what’s called the ‘atopic march,’ where you develop eczema, allergic rhinitis [often called hay fever], and asthma, usually in that order,” says Dr. Dass.

When it comes to what causes eczema in the first place, the experts are still working on figuring it out. “We’re not sure why some people develop eczema and others do not,” Dr. Dass admits. “However, we know that there are many things that can lead to eczema. These can include a defective or skewed immune response, a dysfunction in the skin barrier, and changes in the microbes on the skin. It’s still being debated whether the skin inflammation starts from the ‘outside in’ due to the dysfunctional skin barrier or from the ‘inside out’ due to the immune system.” That dysfunctional skin barrier can be a problem from birth, she says, which is particularly worrying: “The younger you are when you have eczema, the more likely you are to have the atopic march.” The leading indicator that you’re going to have one or all of these conditions, she adds, is your genes: “The biggest risk factor for eczema is having the personal or family history of allergic rhinitis, asthma, or eczema.”

What experts can warn you about are triggers, although these depend on the individual. “Common triggers of eczema include topical irritants, such as soaps and detergents or certain fabrics worn on the skin, and environmental allergens, such as cold and/or dry weather, dampness, dust mites, pet fur, pollen, and mold,” Dr. Malloy tells us. “Hormonal changes can also play a part: People may find that their eczema worsens in the days before their period or during pregnancy.” Dr. Dass adds, “Stress can make eczema worse, as can having dry skin. For some people, their eczema may be worse in the summer when they sweat or get hot. For others, it’s the cold weather that triggers their eczema. Bacterial, viral, and fungal infections can also trigger eczema.”

Another common companion to eczema is food sensitivity. “In patients with eczema, up to 80 percent can be sensitized to foods, but the actual number of people who have a true food allergy is significantly lower,” Dr. Dass elaborates. “This means that if we were to skin test patients to the food, the patient may look like they’re positive. But if we were to challenge the patient to eat the food, only about 15 percent would truly have an allergic reaction.” The good news, Dr. Dass reassures us, is that eating foods you’re sensitive to rarely makes eczema worse in adults, and it’s only slightly more common in children. However, eczema in infants can be an indicator that they will also be allergic to peanuts (allergy to eggs can also indicate this), in which case, Dr. Dass advises, “we recommend that children in this high risk group be evaluated between the ages of four to six months to potentially prevent the development of peanut allergy.”

What can you do about it?

If you’ve only ever had a minor outbreak of dry, itchy skin, it can be hard to picture the potential agony eczema causes people with serious cases. Dr. Dass particularly points to disrupted sleep, which can affect many aspects of your life. “A common misconception about eczema is that it is a minor issue that only affects people in terms of their looks,” says Dr. Malloy. “In fact, it can be a real disturbance to daily life, with intense itching making it difficult to concentrate on anything. For this same reason, many people assume that it will clear up on its own, when treating it quickly is the best way to prevent a bout of eczema from becoming more inflamed and problematic.”

Luckily, there are treatment options for mild to serious cases. It starts with caring for dry skin, Dr. Dass tells us, “which involves showering or bathing daily for less than 10 minutes, using non-scented soap.” Once you’ve patted your skin dry, “non-scented lotion should be applied twice daily.” Speaking of showering, although turning up the water temperature might feel good at the time, don’t be tempted to soak in a hot bath, cautions Dr. Hal Weitzbuch, MD, a dermatologist and medical director of the Calabasas Dermatology Center: “A common error made by patients suffering from this condition is taking hot showers or baths because it feels good on their skin, but conversely it actually makes the skin worse later.”

There are also treatments designed specifically to treat the eczema itself. “The most common treatments are topical steroid medications, which shut off the over-reactive immune response and calm down the rash,” Dr. Weitzbuch explains. “Other common treatments include non-steroidal topical medications such as calcineurin inhibitors and PDE4 inhibitors for more mild to moderate versions and newer injectable medication for more severe cases.”

Where possible, prevention is the best cure. “The best way of preventing eczema is to avoid your triggers, which your doctor should be able to help you identify,” encourages Dr. Malloy. “This may include making dietary changes to avoid foods such as eggs and cows’ milk, which are common triggers of eczema. It is also important to try to reduce the damage from scratching your eczema. While eczema causes itchiness, scratching it can cause the condition to worsen or become infected. Keep your fingernails short and keep the affected area covered by clothing to reduce the damage from habitual scratching.” Hopefully, armed with more info and advice, you can get the relief you need.

Natasha Lavender
Natasha Lavender is a Londoner living in Chicago, and is fluent in British and American. She writes about pop culture, health, lifestyle, feminism, fashion, and interviews with interesting people, and has previously worked for Good Housekeeping magazine, Buzzfeed, and Hello Giggles. She loves podcasts, running, reading, dogs and cats equally, and peanut butter anything.
Healthy Living
Health
Healthy Living Winter
More From Health