Why I Don’t Want My Pre-Baby Body Back 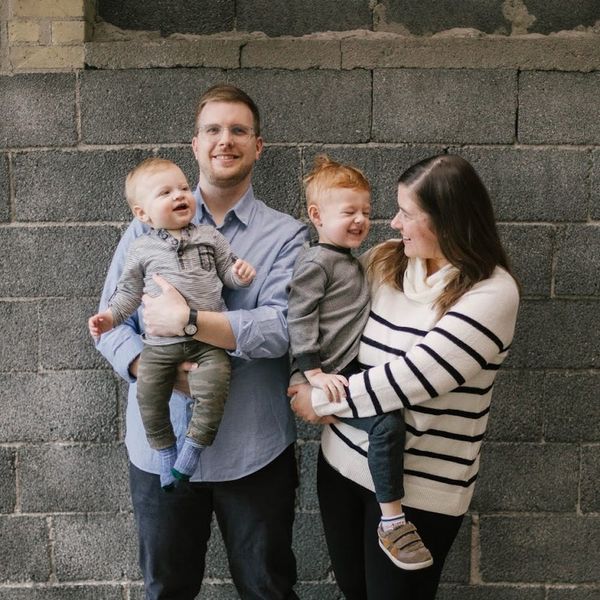 At least once a week, my three-year-old son, Ollie, asks to see pictures of himself when he was a baby, a request I gladly oblige. We scroll through my Instagram feed on the couch, laughing together as I point out silly snapshots and tell him stories from when he was “little” — what he was like, trips we took as a family, funny things he did. Recently, though, he caught me off guard, asking me to stop as I thumbed past a black-and-white photo of my husband and me on our wedding day.

I laughed and told him those two youngsters were his dad and me, explaining that this picture was taken a long time ago, before he came into the world. But beneath the laughter, I realized his innocent question had brought to light a struggle I had been internalizing for a long while. Of course, I don’t blame my pre-schooler for not recognizing me in a tiny photo: I was a good 50 (maybe more) pounds lighter than I am now and wearing a Grecian-style gown with a side-swept updo and more makeup than he’s ever seen me in. The harder part was that I hardly recognized myself.

Most days, I don’t spend too much time thinking about the size or shape of my body. Part of it is that in this phase of my life, my body serves a more practical purpose: chasing after Ollie, breastfeeding my 10-month-old, pounding out words on the keyboard while they both sleep. But when I try on clothes in poorly lit fitting rooms or catch a quick glimpse of my soft, round body in a store window, I’m faced with a choice. Will I punish myself with self hatred or be kind to the hard-working body that gave me my two sons?

For the first few years of motherhood, I chose the former — but instead of motivating me to take care of my body in healthy ways, this toxic perspective stole me from my kids and, ultimately, from myself. I obsessed over what I ate, and often, instead of eating the potentially unhealthy kid foods in my house, I didn’t eat at all, which damaged both my mental and physical health. I nearly lost my breast milk supply as a result of calorie restriction and then got mastitis when I tried to build it back up. My anxiety eventually skyrocketed to the point where I could hardly leave the house. As it turns out, my obsessive effort to return to a version of myself I sacrificed when I chose to have kids was not only fruitless but also was altogether destructive. My life had fundamentally changed when I became a mom, but I just couldn’t accept that my body would too.

The irony is that during that deep, dark struggle with post-baby body image, I was much smaller than I am now. I gained a lot more weight during my second pregnancy due to a nasty combination of hyperemesis gravidarum (translation: constant nausea and vomiting) and crippling anxiety and depression. But for some reason — maybe due to the time constraints of trying to freelance with two kids around (not for the faint of heart) or because I’ve grown up a little emotionally — I care far less about how I look now. I see photos of myself after my first son — photos I cringed at when they were taken — and have to laugh. I was tiny! But I wasn’t happy. All I cared about was how I felt, how I looked, what other people thought of me. I feared other moms would think I “let myself go,” or worse, pity me for my inability to lose weight. I was absolutely obsessed with myself.

So much of motherhood is toggling between caring for yourself and caring for your kids. I realize now that I can’t give myself to my babies if I don’t eat enough, and I also can’t be present with them if I don’t take care of my mind and heart. So in this season, to care for me is to care for them. Before, I thought “caring for me” meant returning to an arbitrary number on the scale, a number by which I defined myself for so much of my life. Now, I see that self-care means being kind and gracious toward myself — and it means eating to nourish my body, not punish it.

Yes: My post-baby body is covered in hot-pink stretch marks. My belly hangs out over the waist of my pants, and at least once a month, a stranger asks me if I’m pregnant (mom hack: compression leggings). Physically, I’m the biggest I’ve ever been, and I doubt I’ll be getting too much smaller anytime soon. But I’m also the freest I’ve ever been, the most emotionally stable and content. I have two little boys who enrich my life, and there’s no way I would ever go back.