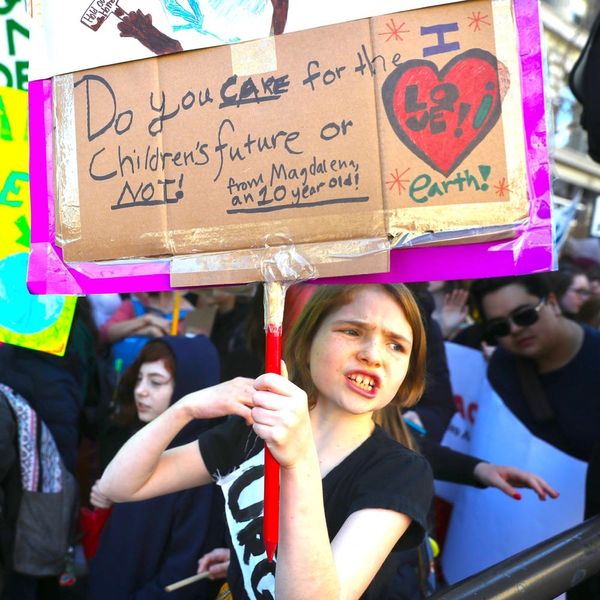 On Friday, March 15, students around the world came together for what has become a weekly protest of young people against inadequate climate change policy among world leaders. The new wave of global student activism has been spearheaded by Swedish climate activist and high school student Greta Thunberg, whose environmental activism just garnered the 16-year-old a Nobel Peace Prize nomination.

Thunberg began a solo protest demanding action from political leaders to prevent impending climate catastrophe last August, and helped inspire other young climate activists to follow suit. For the last several months, students around the globe have been participating in the “School Strike for Climate,” which is also known by a few other names, including Fridays For Future. Students have been withholding participation in school, work, and other obligations on Fridays in order to protest together in the streets.

Thunberg not only helped launch the current wave of student climate activism, but also confronted world leaders in front of the United Nations in 2018, and at the World Economic Forum in Davos in January.

An alarming UN climate report released in October projected that we have, at most, 12 years left to enact the overhauls necessary to stop certain climate catastrophe. Time is running out, and young people who are literally fearing for their lives don’t want to wait anymore. For these kids, climate change is a matter of life or death.

Given the severity of the issue, and a lack of action from the governments that profit from industries that contribute most directly to climate change (including, of course, the US), it’s no wonder young people are up in arms.

This past Friday was the largest strike day yet for the student movement. According to CNN, student strikes were planned in more than 1,700 cities in at least 100 different countries last week, including many cities in the United States. Various news reports and social media posts from around the world highlighted the student strike and the students’ demands for immediate action on climate change.

Kicking off the DC event!! We are here to FIGHT for our FUTURES! #YouthCimateStrike pic.twitter.com/guuZqb5PuO

"We don't want your wishes or your prayers, we want your action"#ExtinctionRebellion #SchoolStrikeForClimate #ClimateStrike pic.twitter.com/GzdSwCaGje

Students striking between 2018 and 2019 are following in the recent footsteps of other young people who went on strike over climate change in 2015. That year, students called for other young people in school to strike from school and obligations like homework to protest for effective climate policy. Their demands were 100 percent clean energy, the elimination of fossil fuels, and aid for people suffering as a result of climate change.

Thunberg’s nomination for the Nobel peace prize just before last Friday’s strike accentuates the impact the young strikers are having on the global community, despite the fact that world leaders still aren’t taking appropriate actions. The acknowledgment of her work by a global audience only drives home that we’re in a moment of widespread, progressive youth activism, tackling climate change and also, especially in the US, gun violence.

The school climate strike movement shows no signs of stopping anytime soon and, in fact, appears to be gaining momentum. Students in many countries plan to continue their practice of Friday strikes, hopefully inspiring even more people to demand action on climate change as they do.

RELATED: Teen Girls Are Leading a Wave of Climate Activism in Europe and, Now, the US

Elizabeth King
Elizabeth King is a politics, history, and culture writer based in the Twin Cities. She is generally pretty cranky but still enjoys traveling, music from the early 2000's, and plotting the resistance. Feel free to say hi on Twitter at @ekingc or check out some of her work at www.elizabethcking.com.
Activism
Politics
Activism Environment Politics
More From Politics