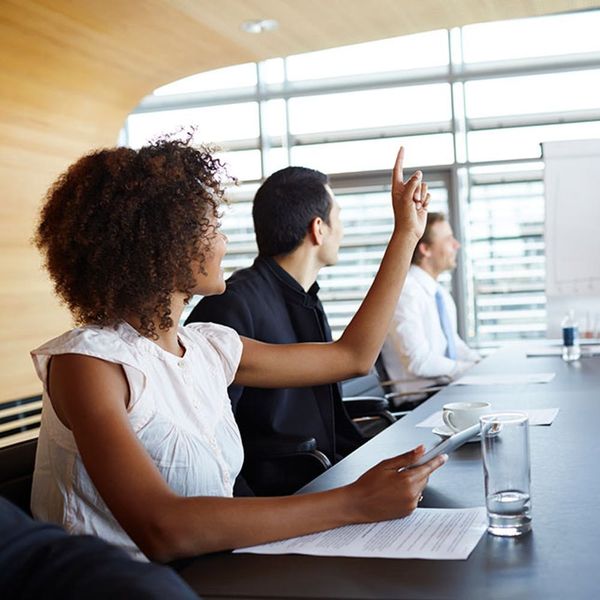 Being an intern can be defined by a checklist of low-on-the-totem-pole tasks: coffee runs, copying documents, and scheduling meetings, to name a few. You work hard to move past being expected to take care of these mundane asks, but every now and then, your boss may put out a request in a group meeting that isn’t part of anyone’s job description. So who takes it on? The answer is, most likely a woman.

A recent study in the American Economic Review reported some disturbing results: “We found that women volunteer for these ‘non-promotable’ tasks more than men; that women are more frequently asked to take such tasks on; and that when asked, they are more likely to say yes,” wrote researchers in a Harvard Business Review article about the study.

In the study, the researchers conducted an experiment in which male and female participants were placed in groups of three, and one person had to volunteer to click a button on a computer within a two-minute timeframe. After 10 rounds, it was determined that women were 48 percent more likely to volunteer than men.

In another experiment, a fourth person, acting as a manager, was added to each group and expected to ask one person to volunteer. The results echoed the findings of the earlier experiment: Women received 44 percent more requests to be the one to volunteer than men, by both male and female “managers.” And when asked, women were more likely than men to agree — 76 percent versus 51 percent of the time, respectively.

When this behavior shows up in the actual workplace, it may seem like a small, insignificant thing. After all, if a woman volunteers to throw a coworker’s going-away party, fill in for a colleague who’s out on vacay, or make the Secret Santa list for the team holiday get-together, what’s the big deal? And as women, aren’t we all too eager to pitch in and help out, especially if no one else is stepping up? But the researchers note that these seemingly benign actions could wind up having a very negative impact on a woman’s career path.

“Despite women’s significant educational and general workplace advances, we continue to find vastly different promotion trajectories for men and women. Women will continue to progress more slowly than men if they hold a portfolio of tasks that are less promotable,” said researchers in the HBR article.

But it’s not as easy as simply saying no to those requests to volunteer, which appears to come a lot easier to men anyway. The true fix has to start at the top. “The solution is not for women to decline more work requests — which would present problems for organizations and hold repercussions for women — but instead for management to find ways to distribute tasks more equitably,” researchers said. For example, rather than just asking for volunteers in general — or specifically soliciting women’s help because they are more likely to agree — the researchers suggest that managers instead rotate tasks amongst employees. “Understanding that women volunteer more simply because men are reluctant to do so should also lead men to volunteer more themselves and should empower women to demand fairer treatment,” they added.

So the next time you’re sitting in a team meeting and your boss asks if someone can alphabetize the file cabinet, instead of throwing your hand in the air, take a moment to pause… and see if maybe a man comes forward.

Do you find yourself taking on mundane tasks at work that you really don’t want to do? Let us know how you handle this situation @BritandCo.