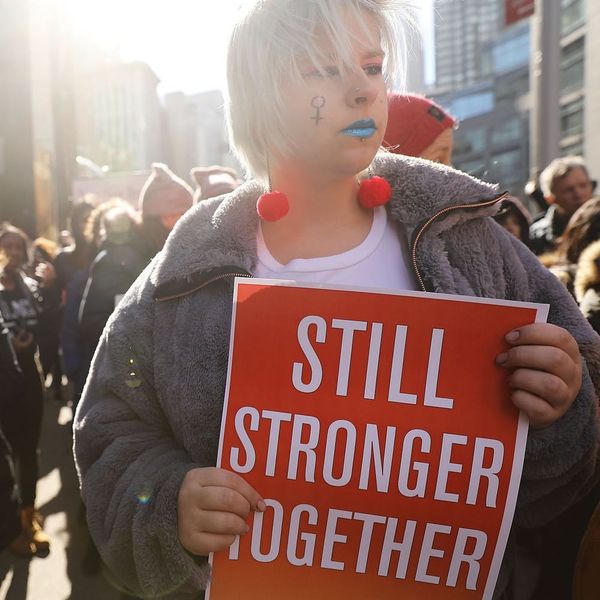 It’s been one year year since the historic Women’s Marches took place, which saw more than an estimated four million people march together in solidarity across the US (The Washington Post puts the figure around 4,157,894) to fight for equality in the form of equal pay, women’s healthcare, and human rights in general. In honor of the landmark anniversary, this weekend will see the second annual march taking place in various cities around the world, as well as a slew of new events, such as March On, and thanks to Facebook Live, you can be part of it all.

If you can’t make it out in person, not to fret: As of now, you can watch all of the action unfold on Facebook Live. Stars such as Viola Davis, Natalie Portman, Eva Longoria, Laverne Cox, Scarlett Johansson, Allison Janney, and more will be on hand at the high-profile Women’s March LA. A number of musical performances are also scheduled, including Rachel Platten and Melissa Etheridge, who will be accompanied by the Gay Men’s Chorus of Los Angeles.

Other cities including New York, Washington, San Francisco, Chicago, Philadelphia, and more are also marching today and you can follow along to the action there, too, or tune into livestreams from around the globe, such as Italy, Canada, and Germany.

And don’t forget to check back in tomorrow for the main event in Las Vegas, when organizers, partners, artists, and activists will take to the streets to not only celebrate the event’s anniversary, but to launch a brand new initiative dubbed Power to the Polls, aimed to “kick-off a national voter registration and mobilization tour targeting swing states to register new voters, engage impacted communities, harness our collective energy to advocate for policies and candidates that reflect our values and collaborate with our partners to elect more women and progressives candidates to office.”

Get a head start by simply texting P2P to RTVOTE (788-683) “to make sure you’re registered to vote, then sit back and prepare to be inspired by watching all the awesome empowerment going down here.

Tag us in your best march snaps @britandco.

Barbara Pavone
Barbara Pavone is a pop culture-obsessed writer based in beautiful (but ridiculously cold) Montreal, Canada. When she's not working, she's sipping on a Pimm's Cup and daydreaming about her celebrity hero, Saint West.
Politics
Empowerment
Politics womens march