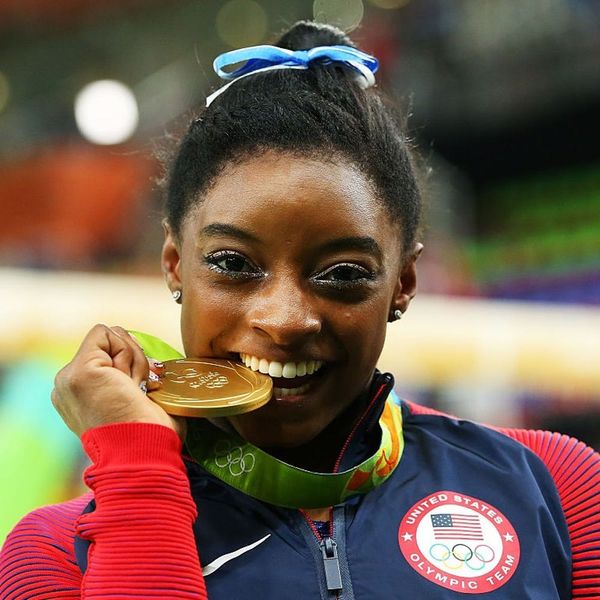 The names of some Olympic greats get a second chance at stardom as popular baby names. The Russian name Nadia, for instance, vaulted from nowhere to number 360 in the US in 1976, after Romanian gymnast Nadia Comaneci charmed the world and won three gold medals. And American skier Bode Miller nudged his unusual name along with the original Sanskrit Bodhi back onto the Top 1000 for boys.

1. Ellia: All names El-related – from Ella to Ellie to Eleanor – are hot baby names for girls right now, but Ellia is a fresh entry to the category, thanks to Australian rugby player Ellia Green. Born in Fiji, Ellia Green is known as the fastest woman in the sport. Her name was used for fewer than 100 girls in the US last year, a number we expect to grow.

2. English: American track and field star English Gardner has to win the gold medal for the most distinctive name at the Olympic games. Gardner says her mother chose the name English because, believing her daughter was destined for greatness, she wanted to give the child a memorable name. While place-names for babies have been exploding in popularity in recent years, this is a new twist, opening the way for babies named Irish, Italian, Pakistani, and so on.

3. Flavia: Ancient Roman clan name Flavia hasn’t been in the US Top 1000 since 1884, but that may change, thanks to pint-sized Brazilian gymnast Flavia Saraiva, a fan favorite. Auspicious sign: Flavia means gold.

4. Ki: Ki Bo–Bae is a Korean archer and the defending gold medalist, and her simple-but-unusual name seems ripe for import. The name is simple yet truly unique: There were baby girls named Kia, Aki and Kiki born in the US last year, but none named Ki. Ki is also the name of the Sumerian earth goddess.

5. Simone: America’s sweetheart gymnast Simone Biles and swimmer Simone Manuel may combine forces to promote this appealing name. The French feminine form of the Biblical Simon strikes the perfect balance between fitting in and standing out. While it’s been in the US Top 1000 for 80 years, it’s never risen above Number 300 and now stands at Number 821 — visible but not pandemic, familiar yet still exotic.

6. Vashti: Vashti Cunningham is a high jumper who may bring her obscure but intriguing Biblical name to prominence. In the Book of Esther, Vashti was a Persian queen — the name is Persian for “lovely” — who defies the king’s orders to appear naked in front of his guests, making her something of a feminist icon.

7. Carlin: Carlin Isles is known as the fastest man in rugby, playing for the American team. His unusual name — fewer than 70 babies were named Carlin in the US last year — was given nearly evenly to boys and girls, making it a perfect choice for our post-gender world. Bonus: This Irish name means “little champion.”

9. Lazaro: Lazarus is one name that’s remained quiet through the explosion of Biblical boys’ names, but its time has come to rise again. Spanish and Italian form Lazaro holds wide appeal. Lazaro Alvarez, boxing for Cuba, is the three-time world champion lightweight boxer.

10. Madison: Madison was a boys’ name that, in recent years, became a Top 10 girls’ name but now is prime to swing back, and London native Madison Hughes, captain of the US men’s rugby team, may help make that happen. The name has feminist roots in its meaning “Maud’s son,” and was very popular for boys in the 1880s.

11. Neymar: Brazilian soccer standout Neymar is known by his unique first name, which was passed down from his father. His prominence was enough to propel the name onto the US Top 1000 in 2012. Neymar is thought to be a combination of the planetary names Neptune and Mars, appropriate for a star.

12. Steele: Diver Steele Johnson’s first name connotes strength and endurance, perfect for an athlete — or a citizen of the modern world. This name was used for exactly 100 baby boys in the US last year… and 11 girls. Another 33 boys were named the more straightforward Steel.

Do you have any favorite past or present Olympian names that didn’t make this list? Tweet us @BritandCo and let us know!