13 Reasons Why Star Slams Whitewashing… With a Poignant T-Shirt 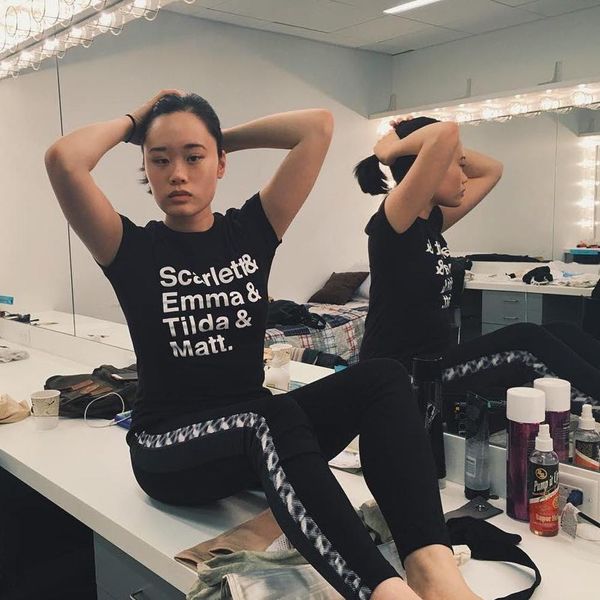 Hollywood has a lot of work to do in the realm of beauty standards, feminism, and pay gaps. Some progress has been made, and that’s largely thanks to stars with platforms speaking out. But there’s still quite a bit of work to do, especially in regards to Asian erasure. Actress Michele Selene Ang, who plays Courtney Crimsen in the new Netflix series 13 Reasons Why, is making her voice heard about whitewashing in Hollywood — without saying a word.

To catch everyone up to speed, whitewashing is when a character of color is cast with a white actor. And many of the most egregious instances of whitewashing of late have been Asian roles filled with white actors, like Scarlett Johansson as Major in Ghost in the Shell (while the character is a full-body prosthesis, the character’s name is originally Motoko Kusanagi and the film is adapted from a popular Japanese anime), Tilda Swinton as The Ancient One in Doctor Strange (the character is supposed to be a Tibetan monk), and Emma Stone in Aloha (Stone’s character is Allison Ng, a woman of a quarter Hawaiian and a quarter Chinese descent). Matt Damon recently starred in The Great Wall, which wasn’t a case of whitewashing but a case of “white savior” — so, still not a good thing.

So, in true political fashion fashion (no pun intended), Ang spoke her beliefs with a T-shirt that reads “Scarlett & Emma & Tilda & Matt.” The shirt ($20) is available at AsianAFMerch.com, and proceeds go to benefit the Asian AF Show at Upright Citizen’s Brigade, an improv comedy institution in New York City.

They took to Twitter as well to praise her for her accurate, no-holds-barred critique:

@AsianAFshow @MarvinYueh Love this. Sadly too true. I'm at #stateofrace & theres 1 Asian on panel. Why are #AAPI always overlooked?

@lauraswolverine On the bright side, the tanking of three of those four movies might end the notion that a white star means better box office. #Hopefully

People were quick to applaud Ang for her post, commenting things like “woke bae,” “here for this!” and “thank u sm for using ur platform to stand up. As a fellow Asian American I am so proud to call u a role model.”

Whitewashing and Asian erasure in Hollywood is nothing new. Mickey Rooney played Mr. Yunioshi in Breakfast at Tiffany’s in 1961, a role that was problematic not just for its whitewashing, but for yellow-face and stereotyping as well. Taking it back even further, 1937’s The Good Earth had an entirely white central cast in yellow-face, including Luise Rainer who won an Academy Award for the role of O-Lan.

Needless to say, Asian-American actors and audiences are ready for Hollywood to be done with the practice. Despite the backlash, it looks like Hollywood still has a ways to go: Another popular Japanese manga Death Note is being adapted for Netflix in 2017, and its two leads have gone to white actors Nat Wolff and Margaret Qualley.

You’ve got work to do, Hollywood.

What do you think of Ang’s statement tee and its message? Tell us @BritandCo!

Shea Lignitz
Shea can be found in the nearest bookstore or brewery, exploring the great outdoors, or blasting Led Zeppelin. She grew up in the cold and rain of Northern California's redwoods but is currently wandering around Texas.
Controversy
Style News
Controversy inclusivity Politics