15 Delicious Disneyland Dishes You Can Make at Home 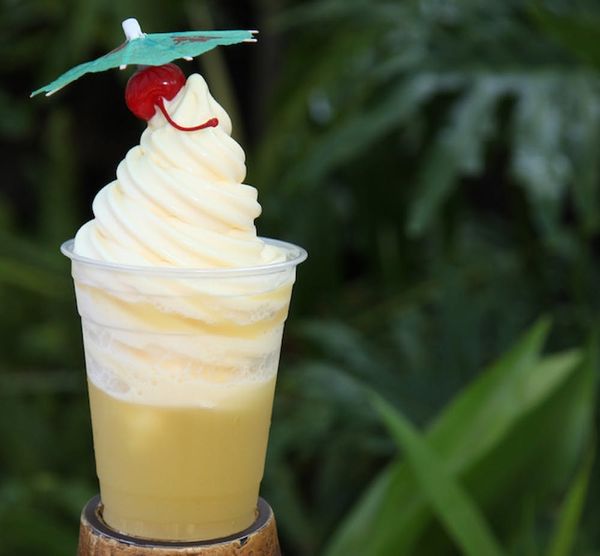 When I think about a trip to Disneyland, I don’t merely think of Mickey, Minnie, thrill rides, countless smiles and crazy fun. I also think about about ALL THE FOODS that we all love to get into our bellies. Nom, nom and yes, nom. At Disneyland, there’s no thing as a diet. There are many wonderful temptations within their huge selection of culinary offerings – both highfalutin and humble – throughout their two parks and three hotels. To help you get a taste of Disneyland between visits, we’ve got 15 Disneyland foods you can make in the comfort of your home (bonus: no lines!).

1. Charred Nebraska Corn Chowder: When we go to Disneyland, we often stay at the Grand California Hotel. Not just for the comfy rooms and stunning arts and crafts lobby, but for easy access to the Storytellers Café and their killer corn chowder. It’s creamy, rich and worth every calorie, and you can make it at home with this recipe from the Disney Food Blog. (Photo via Disney Parks)

2. Beignets: Those Mickey-shaped beignets served up at Mint Julep Bar… they are GOOD, all caps GOOD. Also fluffy, sugary and totally worth waiting in line for. Disneyland even has a couple of twists on the New Orleans’ staple. You can make your own Pumpkin Beignets (that are served up at the fancy-pants Club 33) or their seasonal Gingerbread Beignets (bookmark this recipe for the holidays).

After being hesitant to try this for a very long time, I finally tried the Lobster Roll. It was one of the best things I've had at Disneyland. Although expensive this delicious sandwich was delicious and didn't leave me still feeling hungry. You can find this beauty at the Harbour Galley in New Orleans Square. ● Price: $14.99|AP discount available ● Use #FoodsofDisneyland for a chance to have your photo featured!

3. Lobster Rolls: Your taste buds will be transported to New England when you bite into one of these creamy and decedent lobster rolls at the Harbour Galley in Critter Country. You can make your own at home with this recipe from Disney Parks.

The Matterhorn Macaroon from the Jolly Holiday Bakery on Main Street. ~ Photo: @maryannadevito Use #FoodsofDisneyland for a chance to have your photo featured!

4. Matterhorn Macaroon: This isn’t just any old macaroon — this is an epic tower of yumminess. The Matterhorn Macaroon can be made easily at home; the big difference between your standard macaroon is the height and the addition of snow, aka white chocolate. You can conquer this delish mountain yourself with this Disneyland-inspired recipe.

5. S’mores Bake: The S’mores Bake, served up in a large metal pan, was a beloved staple at the oh-so-missed Big Thunder Ranch (the popular family-style BBQ joint recently closed to make way for Star Wars land). At least we can keep the Big Thunder memories alive with this recipe for their S’mores Bake.

Red's Apple Freeze from the Cozy Cone Motel! ~ Photo: @eatdisneyland Use #FoodsofDisneyland for a chance to have your photo featured!

6. Red’s Apple Freeze: There is srsly nothing better on a hot Anaheim day than a Red’s Apple Freeze from the Cozy Cone in California Adventure. It’s so chill and yummy. For those hot I-miss-Disneyland-so-much days at home, this recipe is a must.

The Safari Skewer (bacon wrapped asparagus) from the Bengal BBQ in Adventureland. ● Photo: @anna.rayann Use #FoodsofDisneyland for a chance to have your photo featured!

7. Safari Skewer:Bengal BBQ is a fab place to get a quick bite in Adventureland. Along with their delish Banyan Beef Skewers and Chieftain Chicken Skewer, their Safari Skewer, or bacon-wrapped asparagus, is a must. And they’re simple to make at home (as evidenced by this copycat recipe).

Disneyland Churros! Absolutely delicious! But pricey 😅 ~ Photo: @disnerdofdisneyland Use #FoodsofDisneyland for a chance to have your photo featured!

8. Churros: The Churros at Disneyland have a cult-like following, and for good reason — they are DELICIOUS. If you find yourself cravin’ them at home, whip up your own via this recipe from the Disney Doctor. Don’t forget the chocolate dipping sauce. Yummers!

9. Dole Whip Float: The Enchanted Tiki Room is a place to rest, relax, visit with Jose, Pierre, Michael and Fritz and last but not least enjoy a Dole Whip! You can make your own Dole Whip Float at home with this simple recipe. (Photo via Disney Parks)

The Monte Cristo is available at Cafe Orleans all day and Blue Bayou during lunch. Sliced Turkey, Ham, and Swiss cheese fried in a light batter. This meal is very heavy and can easily feed 2 people which makes it well worth the price. They are absolutely delicious and one of the more unique things you can find at Disneyland. ~ Prices 👇 Cafe Orleans: $18.99 Blue Bayou: $27.00 including choice of salad or gumbo. ~ Photo: @losangeles_eats Use #FoodsofDisneyland for a chance to have your photo featured!

10. Monte Cristo: Oh, the Monte Cristo — it’s not healthy, or low on calories, fats or carbs, but it’s so, so good! If you’ve feasted on this decadent sandwich at the Blue Bayou or Cafe Orleans, then you probably crave it every now and again while in the real world. Thankfully, you can make it at home with this recipe from Disney’s D23.

I literally can't wait to go to Disneyland this summer!☀️🎢🏰 ・ These are the Panko crusted Chinese long beans from Trader Sam's Enchanted Tiki Bar. Wow! I wasn't really sure if I would like them or not but boy was I wrong! They were so crispy and they were served warm, strait from the fryer! The sriracha aioli that it was served with was creamy and garlicky with a hint of spice. I surprisingly liked these even though I'm not a huge fan of spice. I would prefer these over French fries any day! You can also get these green beans as a smaller portion in the Pu Pu platter but we decided to get the full order instead! Get these at the Disneyland hotel for $9 before AP discount. ・ #disneyland #dca #dlr #tradersams #tradersamsenchantedtikibar #disneylandhotel #sriracha #aioli #yum #eatdisneyland #disneyhungry #foodsofdisneyland #disney #disneyfoodblog #disneylandfood_ #disneylandfood #dland #happiestplaceonearth #downtowndisney

11. Trader Sam’s Panko-Crusted Chinese Long Beans: You know what’s so cool? Trader Sam’s at the Disneyland Hotel. This bar is made to look exactly like an old school tiki dive bar (with better drinks and way better food). One of the highlights on the menu are their Panko-Crusted Chinese Long Beans with Sriracha Mayonnaise, which go so well with a Krakatoa Punch, Shipwreck on the Rocks or a Tiki Tiki Tiki Tiki Tiki Rum. You can make your own enchanted long beans via D23’s recipe here.

Baked Potato Soup from Carnation Cafe on Main Street. ~ Price: $6.49| AP discount available ~ Photo: @alphotony Use #FoodsofDisneyland for a chance to have your photo featured!

As a rule, I'm not big fan of cupcakes, but this #lemonbeecupcake from #hungrybear is something worth buzzing about!!🐝🐝

14. Strawberry-Rhubarb Pie from Flo’s V8 Cafe: After feasting on their Roast Beef & Cheddar, Turkey Dip or their healthy Veggie Tater Bake (above), you HAVE to get one of Flo’s Signature Seasonal Fruit Pie-O-Rama, like the strawberry-rhubarb pie that’s often on the menu. If it’s not, make it via this recipe from Disneyland.

What’s your favorite thing to eat at Disneyland? Tweet us @BritandCo and let us know!

Sunny Chanel
Sunny Chanel is a freelance writer as well as the founder of the whimsical site Wonder and Company. When this proud San Franciscan isn't writing, working on her fixer-upper or doing crafts, she is playing dress up with daughter and planning her next trip to Disneyland.
Home News
More From Home News