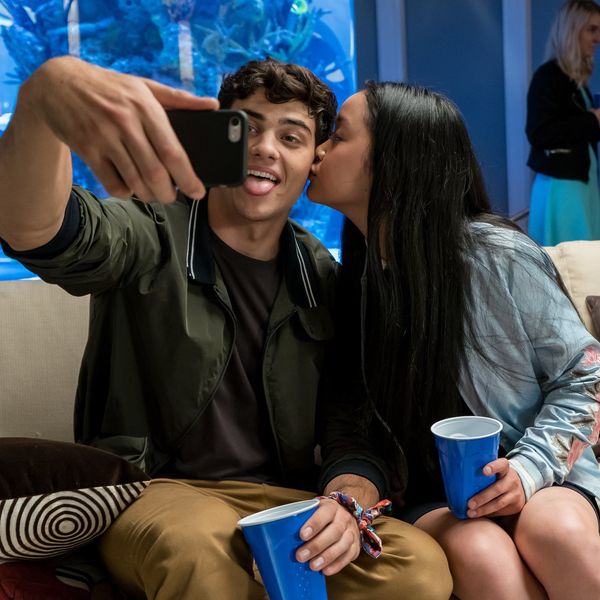 Rom-coms have made a major comeback in 2018. Thanks to Netflix originals like Set It Up and To All the Boys I've Loved Before, and studio films such as Crazy Rich Asians and Love, Simon, the genre is once again alive and well — and the latest offerings are smarter and more diverse than their predecessors. Click through to see 11 movies that are part of this year's romantic comedy revival. (Photos via Robb Rosenfeld/Regatta + Sanja Bucko/Warner Bros. Pictures + Netflix + KC Bally/Netflix)

Crazy Rich Asians: Crazy Rich Asians isn't just a movie — it's a phenomenon. It had the biggest opening weekend for a romantic comedy since 2015's Trainwreck, and a week after its release, the studio is already developing a sequel. Not only that, but the film, which is based on Kevin Kwan's best-selling book of the same name, is the first from a major Hollywood studio to feature a predominantly Asian cast since The Joy Luck Club 25 years ago. And it's good. Great, even. Constance Wu, Henry Golding, Awkwafina, Michelle Yeoh, and the rest of the ensemble are a delight to watch on-screen, and the story itself is unabashedly romantic. More like this, please. (Photo via Sanja Bucko/Warner Bros. Pictures)

To All the Boys I've Loved Before: This Netflix original directed by Susan Johnson is right up there with Crazy Rich Asians as one of the best rom-coms of the year, and it also stars an Asian actress as the romantic lead. Lana Condor plays Lara Jean Covey, a quirky high-schooler who writes secret love letters to her crushes and then hides them in a box in her room. When they get out, she tries to salvage the situation by striking up a fake relationship with one of the former objects of her affection, Peter Kavinsky (Noah Centineo, AKA the internet's new boyfriend). (Photo via Netflix)

Set It Up: Zoey Deutch, Glen Powell, Lucy Liu, and Taye Diggs star in this charming Netflix rom-com about two overworked assistants who try to play matchmaker for their hard-to-please bosses — without either boss knowing. Love does bloom, but not where they expect it. (Photo via KC Bally/Netflix)

Destination Wedding: Keanu Reeves and Winona Ryder, who might actually be married in real life, play guests at a destination wedding that neither of them is especially excited to attend. Their disdain for the happy occasion — and, initially, each other — turns them into unlikely allies… and then more. (Photo via Robb Rosenfeld/Regatta)

Love, Simon: This coming-of-age movie stars Nick Robinson as Simon Spier, a closeted gay teen who forms a close but anonymous online connection with another gay student at his school. It's warm and funny and touching — everything you'd want in a romantic comedy. (Photo via Ben Rothstein/20th Century Fox)

Juliet, Naked: Rose Byrne, Ethan Hawke, and Chris O'Dowd star in this adaptation of Nick Hornsby's novel of the same name, about a woman (Byrne) who strikes up an unlikely friendship (and then more) with her longtime boyfriend's favorite reclusive rock star (Hawke). (Photo via Roadside Attractions)

Sierra Burgess Is a Loser: If you're one of the many, many people who fell head-over-heels in love with Noah Centineo as Peter Kavinsky in To All the Boys I've Loved Before, you'll be happy to know he plays the love interest in another upcoming Netflix rom-com, and he's just as swoon-worthy as ever in that role, too. Sierra Burgess Is a Loser stars Stranger Things standout Shannon Purser as the titular Sierra, who (mostly accidentally) catfishes Centineo's Jamey — with help from her former rival, Veronica. (Photo via Aaron Epstein/Netflix)

The Kissing Booth: Viewers loved this Netflix original about a teenage girl, Elle (Joey King), who falls for her best friend's older brother (Jacob Elordi), despite the very strict rules she and the friend, Lee, have against dating each other's relatives. (Photo via Marcos Cruz/Netflix)

Mamma Mia! Here We Go Again: In this sequel to 2008's ABBA-inspired romantic musical comedy, Sophie (Amanda Seyfried) is pregnant and in the process of reopening her mother's hotel on the island of Kalokairi. As her story unfolds in the present day, we see flashbacks to her mother as a young woman meeting Harry, Bill, and Sam — Sophie's potential fathers — for the first time. (Photo via Jonathan Prime/Universal Pictures)

Book Club: The cast of this movie — which includes Diane Keaton, Mary Steenburgen, Candice Bergen, and Jane Fonda — is reason enough to want to see it. But if that doesn't get you, maybe the premise will. Keaton, Steenburgen, Bergen, and Fonda play four friends who decide to read Fifty Shades of Grey as part of their monthly book club. The sexy novel opens their minds to new possibilities, both romantic and otherwise, and each woman learns something about herself in the process. (Photo via Paramount Pictures)

Overboard: Anna Faris and Eugenio Derbez star in this gender-swapped remake of the 1987 classic starring Goldie Hawn and Kurt Russell. Derbez plays a rich, entitled playboy who, after falling off of a yacht and suffering amnesia, is tricked into thinking he's married to Kate (Faris), an overworked single mom who's struggling to make ends meet. You can guess what happens next. (Photo via Metro-Goldwyn-Mayer Pictures/Pantelion Films)