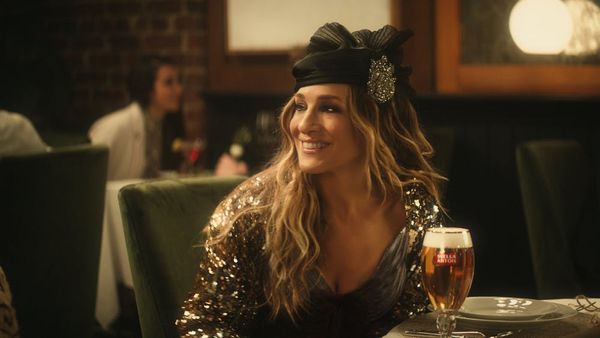 Super Bowl LIII will feature a showdown between the Los Angeles Rams and the New England Patriots on Sunday, February 3, and while sports fans settle in for the biggest game of the year, many others will happily tune in for the entertainment. That includes not only the halftime show, which this year will feature Maroon 5, Travis Scott, and Big Boi, but also the slate of 2019 commercials, which so far look to be pretty promising.

Sarah Jessica Parker, the Backstreet Boys, Serena Williams, Broad City‘s Abbi Jacobson and Ilana Glazer, Sarah Michelle Gellar, and many more stars are featured in this year’s crop of Super Bowl spots, advertising everything from beer to snack foods to dating apps and more. Below, check out some of the best 2019 Super Bowl commercials so far.

1. Doritos: Chance the Rapper gives the Backstreet Boys’ 1999 video “I Want It That Way” a bit of an update for this Doritos Flamin’ Hot Nacho commercial, even joining the Boys in that iconic airport hangar for some hard-earned, perfectly executed choreography.

2. Stella Artois: Sarah Jessica Parker and Jeff Bridges reprise their most iconic roles — Sex and the City‘s Carrie Bradshaw and The Big Lebowski‘s The Dude — in this Stella Artois spot that’s all about “changing up the usual” for a good cause.

3. Olay: Sarah Michelle Gellar stars in this slasher-flick parody commercial in which she’s unable to use face recognition to unlock her phone and call for help, thanks to the transformative effects of Olay’s skincare line. The ad is a total throwback to the actress’ roles in I Know What You Did Last Summer and Scream 2.

4. Pepsi: Steve Carell, Cardi B, and rapper Lil Jon make everything “okay!” or, rather, “okurrrrr” in this delightful Pepsi spot.

5. Bumble: Serena Williams celebrates women making the first move, not just in dating, but in life, in this empowering Bumble ad.

6. Bubly: Michael Bublé gets busted (and scolded) for changing the lettering on cans of the sparkling water brand Bubly. Too perfect a pairing.

9. M&M’s: Christina Applegate impatiently deals with some bratty M&Ms in this spot for the candy brand’s new chocolate bar.

10. Colgate: Luke Wilson is your office’s close talker in this Colgate commercial. Despite his fresh breath, he’s still the most annoying person in your office.

13. Expensify:Big Little Lies star Adam Scott tries to get 2 Chainz to submit all his receipts for his latest luxurious music video shoot, but thankfully, the rapper has Expensify for that.