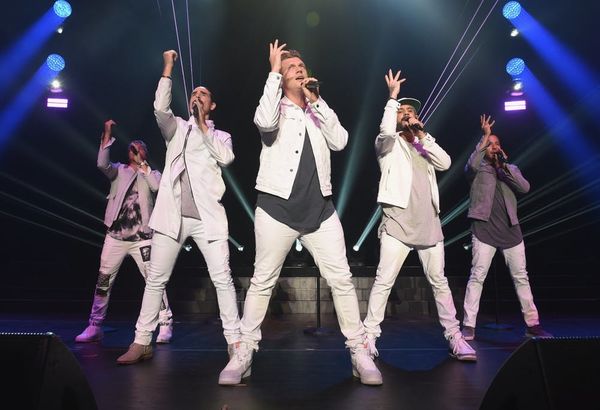 The Backstreet Boys’ iconic choreography may look simple, but as Chance the Rapper learned recently, looks can be deceiving. In a teaser for Doritos’ upcoming Super Bowl ad, the boy banders — AJ McLean, Howie Dorough, Nick Carter, Kevin Richardson, and Brian Littrell — try to teach the Coloring Book rapper some of their moves, with little success.

“I think it’s the pants,” Chance explains as McLean tells the rapper his attempt at learning their choreography is going terribly.

“No excuses, man,” Littrell pipes in, scolding Chance. “Let’s do it again.” He then counts the group in to perform the fist-pumping and foot-stomping dance in sync. Chance’s attempt, however, more closely resembles the Chicken Dance at a wedding.

Despite the fun nature of the new clip, which takes place on a set reminiscent of the group’s “I Want It That Way” video, the Backstreet Boys have previousIy admitted that they don’t have the fondest memories of the classic visual for the song.

“I just remember having to film the music video in between doing a lot of stuff,” Carter told Us Weekly in 2017. “I think we felt that it was super cheesy and it was something that was unnecessary. It was kind of like we didn’t want to do it.”

The video, filmed in an airport hangar and featuring matching all-white outfits, went on to become one of the group’s most memorable clips and helped the song become one of their biggest hits.”It didn’t feel as epic as some of our other videos that we had done prior to it,” Carter said. “[We felt] like it wasn’t the greatest music video — at all. And we didn’t feel like we lived up to it.” Hopefully, revisiting the clip has given BSB the same appreciation for it that we’ve always had.

Doritos’ full Super Bowl ad with the Backstreet Boys and Chance the Rapper will air during the big game on February 3.

Can you do the “I Want It That Way” dance moves? Let us know @BritandCo!