As ’10 Things I Hate About You’ Turns 20, Fans Remember Its Spot-On Lesson About Consent 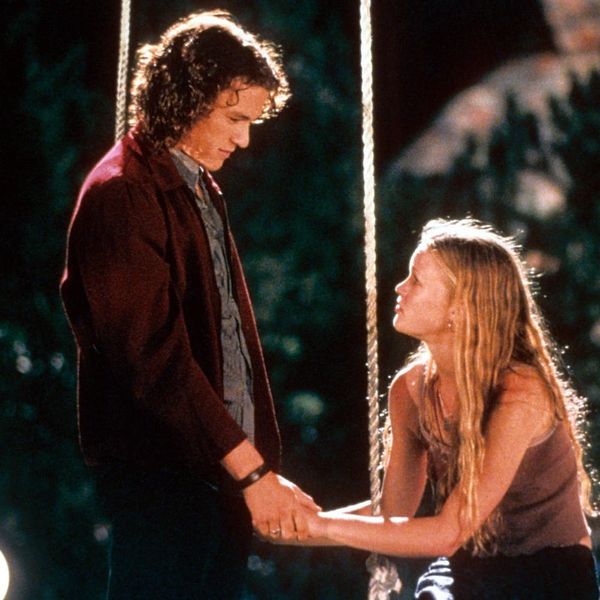 Sunday marks a whopping 20 years since Heath Ledger and Julia Stiles blessed the big screen as stars in the Shakespeare-inspired teen rom-com 10 Things I Hate About You. Based on The Taming of the Shrew, 10 Things was and has remained a favorite for many millennials. As the movie turns 20 (they grow up so fast!), some fans are reflecting on the best parts — including a timeless lesson about the basics of sexual consent, nearly two decades before the advent of #MeToo.

On Wednesday morning, Adweek editor and mental health advocate (and occasional B+C contributor) Sammy Nickalls made this observation on Twitter: “Reminder on the 20th anniversary of 10 Things I Hate About You that Heath Ledger doesn’t kiss Julia Stiles at a party because he’s sober and she’s drunk, and that consent has always been that simple, even in 1999! thank you!”

reminder on the 20th anniversary of 10 Things I Hate About You that Heath Ledger doesn't kiss Julia Stiles at a party because he's sober and she's drunk, and that consent has always been that simple, even in 1999! thank you! pic.twitter.com/rZaouiKIL4

For those who haven’t seen the movie (or need a refresher after 20 years), Ledger’s character, Patrick, takes a bet to woo brainy, man-hating feminist Kat (Stiles) as part of a plot to ensure that her ultra-popular younger sister, Bianca (played by Larisa Oleynik), is allowed to attend the prom. In a surprising twist of events (except, y’know, not at all), Kat and Patrick begin to fall for each other for real.

The pivotal moment of consent doesn’t actually take place in the scene where Kat gets fall-down drunk at a house party, but afterwards, when Patrick drives her home. After the car pulls up to Kat’s house, the two share a moment. “You know, you’re not as vile as I thought you were,” Kat says as she leans toward him for a kiss. As their faces get closer, it looks like they’re going to go for it. Then Patrick catches himself and pulls back. “Maybe we should do this another time,” he says, revealing the integrity of his character — and setting 10 Things apart from the many iconic, yet super problematic, teen movies that came before and after it (hi, Sixteen Candles).

Nickalls wasn’t the only person to shout out the subtle wokeness of the late-’90s classic. Author Emily O’Neill made the same observation while musing about the movie earlier this week.

Over the years, other fans have taken note, too.

Wow, totally forgot that 10 Things I Hate About You had a scene about consent and drunkenness. I love this movie. pic.twitter.com/vtGwC8IRE0

Beyond providing an opportunity for reminders of basic sexual consent lessons, 10 Things I Hate About You is also striking a nostalgic chord. The New York Times just published an oral history of the film that features interviews with some of the movie’s surviving actors (Ledger passed away from a drug overdose in 2008) and screenwriters, and the literary website Lithub released an essay appropriately titled “The Life-Changing Magic of 10 Things I Hate About You.”

RELATED: Death of Nurse-Kissing Sailor from Famous Photo Reignites Controversy Over Its Legacy

Elizabeth King
Elizabeth King is a politics, history, and culture writer based in the Twin Cities. She is generally pretty cranky but still enjoys traveling, music from the early 2000's, and plotting the resistance. Feel free to say hi on Twitter at @ekingc or check out some of her work at www.elizabethcking.com.
Feminism
Empowerment
Feminism Movies