21 of the Best Street Style Snaps from Lollapalooza 2016 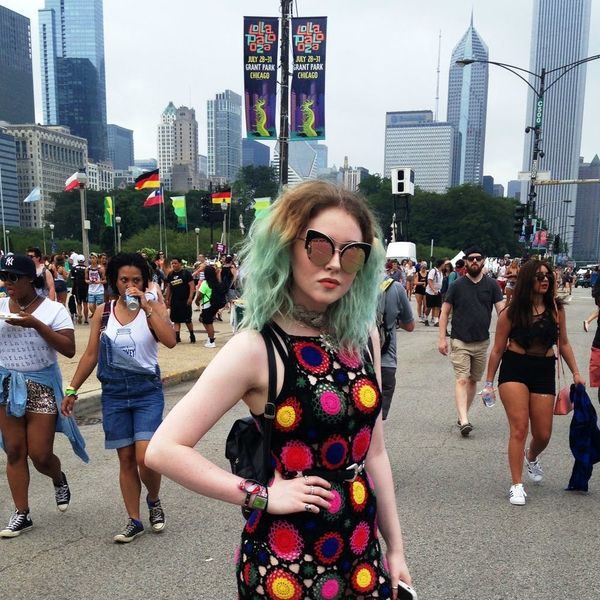 With a 25th anniversary to celebrate, we had some pretty high hopes for Lollapalooza fashion. Make no mistake: This is no Coachella. The style here is every bit as unique as its Midwest locale, and fest-goers have to be prepared for the most unlikely of weather. Plenty of sprinkles were added to the lineup, making this year no exception. Luckily, despite the torrential rains that Chicago unleashed on its enthusiasts in unforgiving sporadic bursts, the unsightly ponchos worn by the masses were offset by a few beautifully shining stars, who owned fest-fashion rain or shine. Check out 21 of the best looks we captured in between the downpours!

1. @vintageren: In a sea of crop tops and shorts, Brenna McMann immediately stood out to us like a beautiful unicorn. Girl looked fierce from head to toe with her stunner shades and boldly hued frock. And don’t even get us started on her rad dip-dye hair. (Photo via Nicole Briese)

2. Elvina Malkoc: Like Brenna, Elvina stood out from the pack, very much marching to the beat of her own drum. Her pantless bodysuit drew as much attention as her bright blue ‘do did, but she was plenty confident enough to pull it off. (Photo via Joey Hill)

3. Mekaila Honey: Mekaila schooled us all on how to rock lingerie in public a la Jessica Alba and Bella Hadid without looking sleazy: In fact, we think she oozed nothing but class. Her black leather jacket added just the right amount of cool to an already badass look. (Photo via Emily Adams)

5. @chelsealayla_: Chelsea Taylor was giving off major French girl vibes as she strolled around the fest with her tied scarf and wide brim hat, prompting other fest-goers to ask if she was famous. Famous style, no question! (Photo via Emily Adams)

6. @ainsmbrown: Ainsley Brown was cute as could be in her matching off-the-shoulder crop top and short set. Tops like hers were a big trend at the fest, keeping attendees cool and en vogue. (Photo via Joey Hill)

7. @natalie_pieper: Natalie wasn’t afraid to mix and match, sporting a lace bralette with coordinating shorts and a denim vest, looking fierce even after a downpour. (Photo via Nicole Briese)

8. @seemata: Cristina Mata was more than ready to “catch them all” at Lolla in her Pokemon hat and bralette. Topping off her look with a gold lamé skirt and trusty fanny pack, she was prepped and ready to snag any that crossed her path. (Photo via Joey Hill)

9. @sail0r_g00n: You were unlikely to find many more stylish than Sandra Guan on day one. The unique plunging neckline of her breezy jumpsuit took things next level, as did her delicate lariat necklace and trendy rose-gold ends. (Photo via Joey Hill)

10. @brooke_goldmann: Brooke was having a great time in her suede fringe skirt and silver statement necklace and it definitely showed: Laid back and ready to rock, she was the epitome of hippie fest chic. (Photo via Emily Adams)

11. @kaylanejedly: With so much black on the grounds, Kayla Nejedly was a breath of fresh air in her colorful crochet tunic. It didn’t hurt that her personality was every bit as bright as her fest-wear, either! (Photo via Joey Hill)

12. @mageecampana: Magee’s lace-up bodysuit played peekabo beneath a sheer dotted skirt that she kept together with a double-buckled belt. (Photo via Nicole Briese)

13: @alexanicole509 + @soli_perry: With their perfectly pulled back hairstyles and matching (purple!) grins, Alexa Williams and Soli Perry didn’t have a care in the world about braving the storms Chicago skies brought their way. (Photo via Nicole Briese)

14. @hmd.4: Hailey Dougherty paired fringe upon fringe with her skirt-and-bootie combo, yet somehow it didn’t seem like overkill at all. She also took a cue from the Body Bauble girls, stepping up her game with some added facial bling. (Photo via Emily Adams)

15: @_emily_boss: Emily Boss was comfy and boho-chic in her flowing off-the-shoulder dress, adding a colorful headwrap for flair. She also owned the fest’s most popular trend with her lace-up cage sandals, albeit in a shorter version than most. (Photo via Nicole Briese)

16: @anahata.adri: We were instanty enamored with Adrianna Sesi’s suede lace-up look, complete with headwear and fringed wrap. While she makes the ensemble look entirely effortless, don’t be fooled: The coordination happening here is intricate, and spot on. (Photo via Nicole Briese)

17. @darajazra: We loved the fun pops of color glamazons Jayna and Dara brought to the table, from their bold eyeshadow to their bright accent pieces. (Photo via Joey Hill)

18. @ana_belleeee: Anabelle Batina looked gorgeous long after the rain began to fall in a jersey two-piece with weather-ready booties. (Photo via Nicole Briese)

20. @magssully14: Margaret Sullivan took it back to the ’80s in some acid-wash shorts, round Lennon shades and a Van Halen tee, hitting us hard with a wave of nostalgia. (Photo via Emily Adams)

21. @littlepepp: In doily shorts, a peasant blouse and a black brim hat, Stephanie Santoro couldn’t have been more on trend, but it was her purple hair that really drew us in. (Photo via Joey Hill)

Which look was your favorite? Tell us over @BritandCo!

Nicole Briese
Nicole is the weekend editor for Brit + Co who loves bringing you all the latest buzz. When she's not busy typing away into the wee hours, you can usually find her canoodling with her fur babies, rooting around in a bookstore, or rocking out at a concert of some sort (Guns N' Roses forever!). Check out all her latest musings and past work at nicolebjean.com.
Festival Style
Style News
Festival Style Street Style
More From Style News