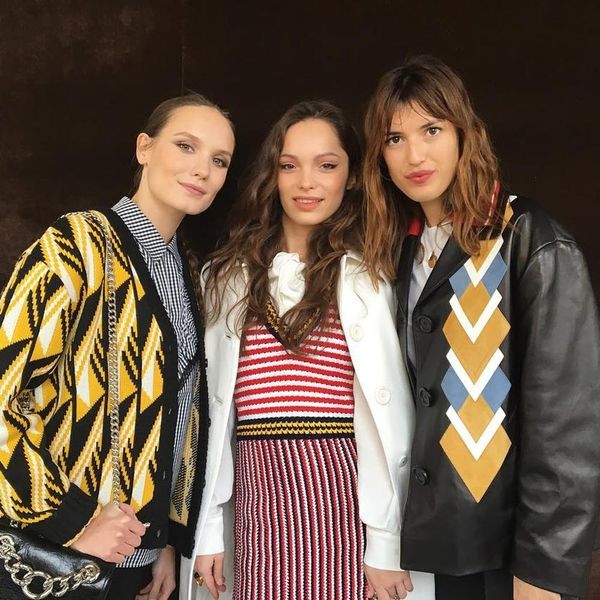 Everyone can agree that French-girl style is straight-up swoon-worthy, but the aesthetic is so much more than closet basics, Brigitte Bardot and French-girl stripes. The proof cropped up in the streets and on the catwalks during the Paris Fashion Week Autumn-Winter ’16 season. The 21st-century French girl is edgier, but maintains her effortless sexiness. The je-ne-sais-quoi that you can’t get enough of isn’t going anywhere (*cue sighs of relief*). That said, if you want to infuse your style with a bit of the Parisian vibe, expanding your horizons is essential. So, where to start? We’ve pulled together some of the hottest runway and street-style looks from La Ville Lumière so you can channel your inner Francophile the 2016 way. From silk scarves to double denim and socks with sandals, scroll on for 15 impeccable looks to rock now.

1. Think’70s chic. From Jeanne Damas to Camille Charriere, the fashionable French set is diggin’ those groovy ’70s vibes. Flares, boxy coats, round sunnies and suede galore — it’s all fair game. This is good news for you, since one of these trendy pieces has most likely found its way into your closet by now. For an #OOTD with undeniable oh-la-la factor, go all out with cropped flares, glove shoes and an oversized coat in a shade of mid-century orange. (Photo via @camillecharriere)

2. Peek-a-boo shoulders are in. While other countries are redefining the white button-down shirt, the French are busy flipping the script on cool-weather sex appeal (would you expect anything else?). Draping your jacket nonchalantly over your shoulders may have been the height of effortless chic, but now it’s all about letting it slide. OFF/White declared off-the-shoulder outerwear the ultimate way to layer, playfully exposing one-shoulder with a bit of purposeful draping. Consider this the sartorial equivalent of the infamous French bedhead. (Photo via François Durand/Getty)

3. Think outside the Breton stripe box. You’ll be hard-pressed to find a French girl that lives solely in Breton stripes, so why limit yourself to linear prints? Branch out with classic argyle, feminine florals, pop art patterns and geometric designs to give your collection of forever basics a punch of personality. When in doubt, just ask WWJDD (What would Jeanne Damas Do?). (Photo via @jeannedamas)

4. Silk scarves are essential. The power of a silk scarf cannot be denied, and French It-girls get that. Whether you tie it elegantly around the neck or rock it around your wrist, a colorful foulard adds polish to even the simplest #OOTD in seconds. (Photo via Pascal Le Segretain/Getty)

5. It’s all about balance. The key to nailing Parisian panache? Striking the right balance of luxe and laid-back. A faux fur coat paired with an understated t-shirt and jeans combo reads street style-worthy every time. For an after-hours alternative, team an elegant LBD or flowy maxi with shimmery jewelry and just-kickin’-it sneakers. (Photo via @stelouchebabouche)

6. Socks and sandals just work. A French girl’s shoe collection is not built on ankle boots and Stan Smiths alone. France experiences cold weather too, so creative layering comes into play on the daily. Socks are essentially a savior, stepping in to keep sandals, strappy pumps and slip-ons in play all year long. Bonus points for funky patterns, eye-catching color and flecks of glitter. (Photo via François Durand/Getty)

7. A statement sweater is always a good idea. Whoever said fussy was the shortcut to fabulous (probably the same person that coined the phrase “No pain, no gain.”) obviously never owned a sweater this stylish. Whether you’re cracking down at the office or out running errands, a statement sweater that’s as stylish as it is cozy will always do you right. Pair it with mom jeans and patent pointed-toe boots for an ah-mazing off-duty ensemble. Toss it over a pleated midi and metallic flatform loafers for endless #girlboss vibes. (Photo via @adenorah)

8. Double up on denim. Forget whatever you’ve heard about denim being a faux pas among Parisians — it couldn’t be further from the truth. Case in point: the Stella McCartney runway (and for extra street cred: Caroline de Maigret IRL) where double denim reigned supreme. For a bit of that classic French girl appeal, stick with black skinny jeans on the bottom paired with buckled black ankle boots. Come-hither eyeliner is non-negotiable. (Photo via Pascal Le Segretain/Getty)

9. Embrace le smoking 2.0. Just like every girl needs an LBD, no closet is complete without that suit. Yves Saint Laurent’s Le Smoking didn’t catch on for nothing, you know. The femme fatale edge and streamlined silhouette were the ultimate recipe for style success. Classic black will never steer you wrong, but it’s difficult to deny the allure of this shimmery silvery number. Soften the sharp tailored look with a skinny scarf and loose, romantic waves. (Photo via @sorayabakhtiar)

10. Say sayonara to red lips. Iconic though they might be, red lips are about to take a backseat to ultra moody shades of plum and brown, according to French fashion house Louis Vuitton. Blame it on the wave of ’90s fever running through fashion at the moment, but French-girl goth is totally a thing. We have to admit, we kind of like it. (Photo via Pascal Le Segretain/Getty)

11. Look beyond the biker jacket. Striped shirt, leather jacket, silk scarf and skinny jeans — the iconic “French girl” getup, right? Wrong. We’ve already debunked the Breton stripe myth, and now it’s time to take a closer look at another style essential — the leather jacket. Moto silhouettes are likely your go-to choice. They’re classic, and the cut is timeless. For a while now, a revolution has been brewing in Parisian streets with new styles like bombers, trenches, car coats and blazers usurping power. We say “Vive la révolution!” The result is stunning, and doesn’t compromise on that enviable rocker chic element. (Photo via @collagevintage)

12. No closet is complete without a little velvet. French style in 2016 is anything but drama-free, but trust us: You’ll love every minute of it. Exhibit A: super soft velvet. The luxe fabric swings both ways, toeing the line between romantic and sports chic. Fluid dresses with baroque flair as seen at Nina Ricci evoke classic romance while the larger-than-life puffer coats at Stella McCartney and sleek leggings at Balmain remind us of Sporty Spice. The lesson to take away? Add it to your athleisure lineup stat. (Photo via Pascal Le Segretain/Getty)

13. Fuse counterculture and athletic aesthetics. Introducing: the new pared-down Parisian. A little bit goth and a whole lot of athleisure, this look is like nothing you’ve seen before (as far as French-girl style is concerned). Layering takes on an all-or-nothing attitude, with texture and a spectrum of deep hues driving the unexpected ensemble home. To amplify the effect, ditch don’t-care hair for boxer braids and go au naturale in the beauty department. Warning: not for the faint-hearted. (Photo via @annecatherinefrey)

14. Tap into your masculine side. Borrowed-from-the-boys fashion for the French-girl means oversized styles and elongated silhouettes. Basically, this look is a lazy girl’s dream. To highlight the over-the-top proportions, layer on sleek separates, like leather pants and a turtleneck top, or go there with wide-leg trousers and billowy blouses. (Photo via François Durand/Getty)

15. When in doubt, braid it up. Work those bedhead locks to your advantage and weave hair into a mermaid-like fishtail braid on day three (or four). Add a spritz of dry shampoo and you’re golden. Pair this look with a robe coat and midi dress for anytime-appropriate perfection. (Photo via @kenzasmg)

Libby MacCarthy
Libby MacCarthy is an urban planner turned writer with a love (bordering on unhealthy obsession) of all things fashion and beauty related. She lives for perfectly brewed coffee, farmer's markets, dinner parties and perusing impeccably designed boutiques. When she's not on the hunt for the latest trends, you'll likely find her plotting her next adventure or nose deep in a book. Libby currently splits her time between the East Coast and her adopted home of France. Follow her daily adventures on Instagram.
Fashion Week
Trends and Inspo
Fashion Week Spring Style
More From Trends and Inspo

18 Headbands for Spring That Will Turn Heads