We Tried It: The 30 Minute Morning Routine for Working Moms 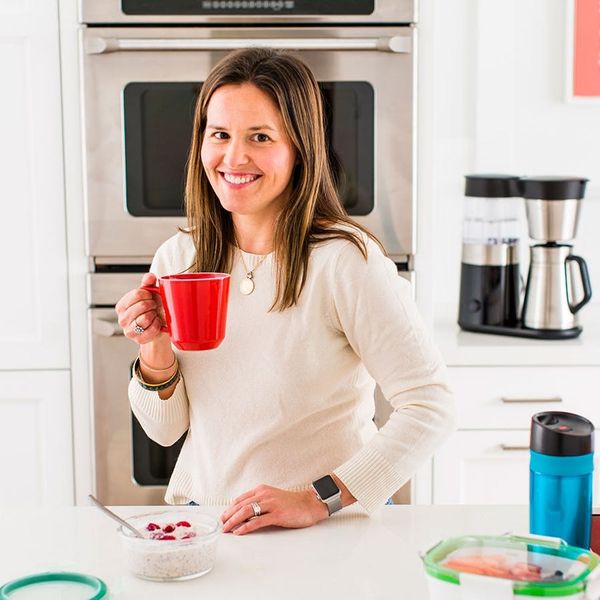 We’re all familiar with the morning scramble, aren’t we? You know, that constant compromise between getting everything — and everyone — ready to go and hitting that snooze button *one* more time? Well, with the help of OXO, we may have found a solution: a 30 minute morning routine that will have you and your family dressed, fed and out the door while getting a touch more beauty rest, too. It involves these five hacks to expedite the family’s morning routine:

Key to this routine are OXO’s super smart Barista Brain 9-Cup Coffee Maker and Conical Burr Grinder, two machines that will make the day’s first cup a cinch to brew without compromising quality. The 9-Cup Coffee Maker takes the guesswork out of preparing your coffee by regulating time, temperature and volume, and the Conical Burr Grinder’s built-in digital scale will measure the precise amount of coffee grounds needed, every time. For both, all you need to do is push a button. Both products are part of OXO’s latest genius campaign: They’re all about testing their products on people — real people — with different preferences and skill sets to build truly useful tools that will make everyday living easier.

We enlisted Cameron Rivinus, Brit + Co’s VP of Commerce and mother of two, to test this morning routine for a week and *really* see if it works. (Thanks, Cameron!) Scroll on to see how it unfolded!

First up: Use OXO’s genius products for your morning cup of joe. Before waking up her baby boy, Ned, and four-year-old daughter, Frankie, she ground fresh beans and brewed coffee — some to sip on while getting ready and some for the road.

Here’s Cameron’s Verdict: “Having a moment to myself with a fresh cup of coffee was a delightful pick-me-up. I normally get coffee on my way into work, but having a cup at home gave me an earlier perk and is more cost effective. OXO’s coffee maker and grinder are great for a working mom because they make it so easy for you to get a perfect cup, and the coffee maker has a programmable timer so that you can have your coffee ready for you in the morning. They are also easy to clean and have counter appeal — Frankie even commented that she liked the new coffee maker better than the old one because it was silver and shiny!”

Did this hack expedite her morning routine? Yes!

Cameron said that using the Conical Burr Grinder was very intuitive — she simply poured beans into the hopper, set the number of cups, adjusted the grind size and strength to her preference and pressed the button. Moments later, the exact amount of ground coffee she needed was weighed and ready to go.

Cameron poured the grounds into the coffee maker, added water, selected the number of cups she wanted to brew and pressed the button. As she continued to get ready, the water was transported to the brew basket in measured cycles, including a pre-soak cycle so the coffee grounds could bloom. Minutes later, she had a pot of perfect coffee.

Next up, the ever-trendy overnight chia seed oatmeal. There are tons of variations of this, but we went with Cameron’s favorite combo: raspberries and vanilla.

As we mentioned, this recipe can be customized tons of different ways. For instance, you could swap the raspberries and preserves for your own favorite fruit or add cinnamon and nuts.

We had Cameron make this recipe at home. Here’s her response: “I personally really liked this recipe. But when making breakfast the night before, you need to make sure it’s something that your kids will want to eat. I made the mistake of trying something without testing it with my daughter first. It did not go over great — so I had to make a second breakfast. I went back to a breakfast egg muffin hack that I have used in the past. The best part of that is that you make a bunch in advance so then you have to pull them out of the fridge or freezer instead of having to make a new breakfast every night.”

Did this hack expedite her morning routine? Kind of! It was a good breakfast hack for grown-ups, but not so much for kids.

Hack #3: Pack Lunches the Night Before

This is not a new concept, but it’s always talked about for a reason. Prepping lunches the night before frees up a solid ten minutes every morning. Let’s see what Cameron had to say about it!

Cameron’s Response: “Preparing the night before spilled into other areas of my life and made me a bit more organized overall! Mornings still are a bit of a scramble, but I found myself planning in other areas of my life which had made my mornings a bit more relaxed overall. I sometimes found it hard to take the time in the evening to prepare breakfast or pack lunch; however, I knew that it would help my mornings so it was worth prioritizing.”

Cameron used OXO’s On-the-Go Lunch Containers to pack her and Frankie’s lunches. The stackable containers keep different parts of the lunch separate so nothing becomes soggy, plus it has a leakproof seal.

Did this hack expedite her morning routine? Absolutely.

Hack #4: Choose Your Outfit the Night Before

We’re no strangers to this hack around here — in fact, our Creative Director Anj swears by it. But the real game changer is having your kiddos do it too!

Here’s Cameron’s Feedback: “BEST overall is having my daughter pick her clothes out the night before. She gets so into it and feels really proud and independent. This also spilled over into her wanting to do more — making her own bed AND making her own lunch. (Not necessarily time savers YET, but I love that she wants to take on some responsibility.)”

Do you have any tips to make these hacks even better? “Putting the kids’ shoes at the front door is a huge time saver!! Have your kid pick them out (with the outfit) the night before, and leave them at the front door with socks so that they’re ready to go.

Did this hack speed up her morning routine? Yes! This was one of the best time saving hacks she tried.

Hack #5: Have a Morning Playlist for the Kids

Rumor has it that music helps kids get ready faster. You can make getting ready a game: For example, when the song stops, her bed has to be made. By the time the playlist is over, you’ll for sure be out the door.

Did this work for Cameron and Frankie? “Having our playlist was a big help and got her to move a bit quicker in the morning! We found Katy Perry’s Firework and *anything* Taylor Swift especially motivating.”

Looks like Frankie definitely got her morning wiggles out!

It’s the moment of truth: Is the 30 minute morning routine feasible for working moms? While Cameron said these absolutely expedited morning prep with her kids, they didn’t take into account personal preparation time — like showering and beauty prep. We asked Cameron to elaborate:

“The most important change I made employing these hacks was to get myself as ready as possible before waking up Frankie… then I’d time myself to see how quickly I could get out of the house. 30 minutes from waking Frankie to walking out the door was definitely doable!”

Is this sustainable? Could you do this every weekday morning? “Yes! Most of these hacks we have incorporated into our evening and morning routine and I love the efficiency that they’ve created. Mornings have become a bit more fun, enjoyable and productive! Also, I’m having lots of fun with Frankie picking out my outfits for the next day. She is way into it!”

Do you have any other advice for speeding up your morning routine? “With kids, it’s all about motivation. It’s about testing things that work for them and sticking to it. Trying new hacks helped me to come up with other ideas to make sure that we can keep our mornings moving along.”

Thanks Cameron and family!

Will you be trying any of these hacks? If so, we’d love to see the results! Tweet your findings @BritandCo so we can hear about it!