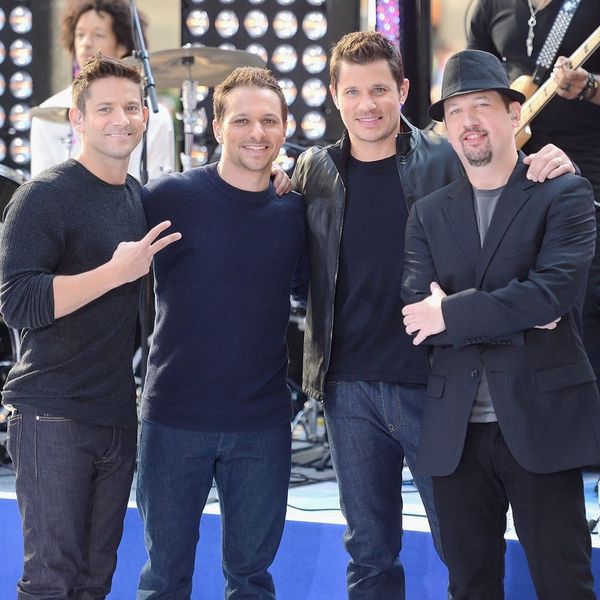 Nick Lachey may be a devoted father and loving husband these days, but that doesn’t mean he can’t make time for his 98 Degrees family. While we’re still holding out hope for a Backstreet Boys/Spice Girls tour, there’s another ’90s boy band tour heading to a city near you very soon: Lachey and his former bandmates Drew Lachey, Justin Jeffre, and Jeff Timmons are recording a Christmas album, then hitting the road.

Let It Snow will mark the band’s first release in four years and their second-ever Christmas album (their first, This Christmas, came out in 1999). The record will feature the group’s fave festive songs, as well as one original tune.

What was your favorite memory from the Revelation album and tour?

While putting together their track list, the guys made sure to pick some lesser-known titles that even they had never heard of before, like “Run Rudolph,” which Timmons described to ET as “kind of a throwback to our roots at Motown and the track’s pretty amazing, so I’m really excited about that one.”

I've been waiting to give this gift tonight 🎁 new tour and album! Pre-sale tickets on sale AUGUST 15th. Link in bio for all info!

Revealing why they decided to go so festive with their October 13 release, Nick’s younger brother Drew told the outlet, “We feel strongly about these memories that you make when you listen to Christmas songs. To be a part of a family tradition and something that [fans] put on every year… that’s pretty magical.” That it is!

We’ve been in our workshop putting the final touches on something special. All will be revealed soon. What do YOU want for christmas from 98 Degrees this year? #98Christmas

In the spirit of giving, 98 Degrees also revealed that, starting November 10, they’ll be going on a 31-city Christmas tour, during which they’ll play their holiday hits as well as some of their biggest classics. “We’re looking forward to it,” Jeffre said. “We toured last summer and had a blast and I think we have a lot more fun these days. Maybe it’s because we’re just more experienced and there’s less pressure, but the fans are still there.” Yes, we are! And we’re beyond ready to have more 98 Degrees in our lives.

Barbara Pavone
Barbara Pavone is a pop culture-obsessed writer based in beautiful (but ridiculously cold) Montreal, Canada. When she's not working, she's sipping on a Pimm's Cup and daydreaming about her celebrity hero, Saint West.
Music