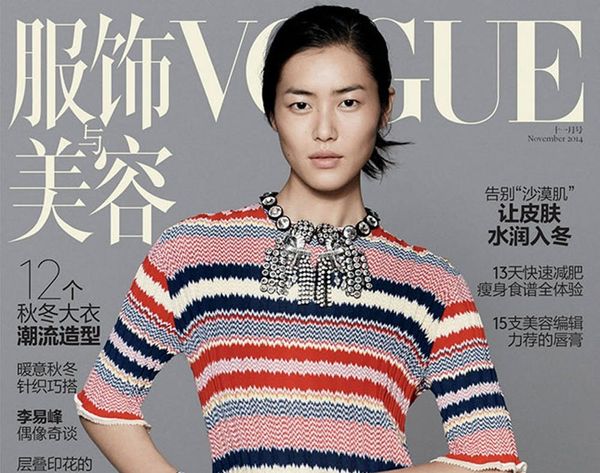 Look closely — there are actually two mega stars on the cover of VogueChina’s November issue. There’s supermodel Liu Wen, one of the world’s highest-paid models and Victoria’s Secret star, and then on her left wrist, the Apple Watch. If you had any doubt that the fashion set would ever count the newly unveiled wearable as its next obsession, consider this move its very posh nod of approval.

On the silvery cover, the yellow-gold Apple Watch is styled out with other major statement accessories, and with its punchy at-a-glance interface, it totally holds its own. The smaller 38-millimeter timepiece+ is outfitted with a thin red band to coordinate with the bold Ikat-style stripes on Wen’s Céline shirt dress, which earns it points for personalization — remember, this wearable broke from the one-style-suits-all camp with its collection of customizable, interchangeable bands. But what really wows us is its overall ability to fit right in with a cover-worthy ensemble. It doesn’t look at all tech-y — it’s sleek and sophisticated on top of being functional. It’s a wearable wearable (whoa), and after this cover shoot, it might be the frontrunner for the most wearable of the high-end techcessories we’ve seen so far. Once again, Apple FTW.

What do you think of the Apple Watch’s Vogue debut? Are you impressed? Or do you still want to see for yourself? Tell us in the comments below.