24 Things You Need to Know About the Apple Watch 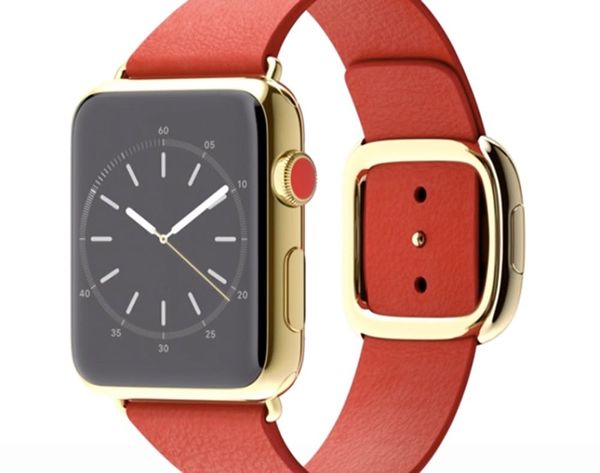 After years, wait, no it was actually just months (we’re REALLY impatient) of waiting for yesterday’s big Apple announcement, we got our just desserts in the form of two new phones, mobile payment that promises to replace your wallet, a U2 performance and a wearable to revolutionize tech-sessories as we vaguely know them. After all that buzz about iPhone 6 this, iPhone Plus that, it was the Apple Watch who truly stole the show with a reveal fit to fill the Flint Center (and the Mother of All Tents) with woos, oos and ahs for days. There has been speculation about the watch’s specs for awhile, so let’s take a look at the facts, the questions still left unanswered and the rumors we’re still into believing. Here’s a cheat sheet of everything you need to know about the Apple Watch.

1. Put It on Your IOU Xmas List: There is no release date, but the official word is “early 2015.” If that’s January 1, great (we bet there will be a pre-order situation so they can catch the holiday crowd). If it’s February 9 (this editor’s birthday, ahem) we’ll also accept that.

2. There Is a Watch for (Literally) Everyone: Hearing our Goldilock-like complaints about how this wearable was too X and not enough Y, Apple is giving us the option to customize with different size faces and different material straps. The wearable even comes in three collections, Apple Watch, Apple Watch Sport and Apple Watch Edition depending on the look you want and the type of usage you have in mind for it.

3. The Digital Crown Is the New iPod Click Wheel: Apple’s latest innovation to detail is watch’s Digital Crown. The button on the side of the watch winks to a regular ol’ watch’s wheel but will work to zoom your screen, scroll through apps and call up your home screen.

4. The Face Comes in Two Different Sizes: Forget the rumors that the watch has a round face or is part of a FitBit-like band, BUT rejoice that you’re not stuck with a one size definitely does not fit all face for your wrist. The Watch features a 42mm rectangular face and a 38mm square face and comes in different metals: stainless steel, black stainless steel, silver and gray aluminum and 18K yellow gold and rose gold.

5. The Bands Will Make You Dance: From metal links to leather loops, classic and modern buckles, a sport band and even a chainmail-esque Milanese loop, we’re dizzy counting out our options.

6. It’s a Timepiece, Too: ‘Lest you forget and before we move on to anything involving an app, let’s talk about normal watch stuff, like time. Apple says the wearable will keep time within “50 milliseconds of the definitive global time standard.” If you’re traveling or acting out that scene in A Walk to Remember, it will automatically adjust to the local time wherever you take it.

7. The Battery Life Is Not Awesome… Yet: Real talk: That new watch is not revolutionizing smartwatch battery life at the gate. Re/Code is reporting that battery life, according to their sources, is comparable to other wearables and you would have to charge up nightly if you plan on wearing and using your watch all day. This isn’t great news, but could encourage innovation by way of on-the-go charging: think cordless charging stations and battery sharing between Apple devices. We’re ready to pledge early bird to a genius Kickstarter or two. For now, the watch charges with Apple’s MagSafe tech + inductive charging and will likely last for about 18 hours at a time.

8. Taptic Feedback: You’ve heard of haptic feedback, now get ready for taptic, which is the Watch’s way of alerting you to notifications. You’ll get a gentle tap from texts, email or whatever you set up, plus you can send special taps or even your heartbeat (!!) to contacts wearing Apple Watch. Me-yow.

9. Call and Text from the Watch: Get ready to take your tech to Inspector Gadget levels. You’ll now be able to text without a keyboard and make calls from your wrist. When you receive a text, you can dictate a message, select from preset options or try one of Apple’s suggested texts (which, if auto correct is any indication, should be GREAT). A built-in speaker and microphone means you can answer calls and then transfer them to your iPhone, car speaker or a Bluetooth headset.

10. New Emoji: Apple Watch comes equipped with its own emoji (please see above), plus you can use Digital Touch to draw on your Apple Watch and send your own finger art to friends and lovers wearing watches.

11. It’s Always Tracking You: But not in a creepy way. The watch’s accelerometer and custom sensors will take care of simple activity tracking for you on three levels, for any and all fitness levels. The Activity app reports that data in a simple, three-ringed graphic that shows how many calories you’ve burned, how many minutes of “brisk activity” you’ve done and how often you’ve stood up and taken a break from sitting. In the zone at work? Good for your boss, bad for your heart, but either way the Watch will nudge you when you’ve been idle for too long to get you on your feet.

12. This Can Replace Your Tracker In and Out of the Gym: Okay, Sporty Spice, maybe you want your wearable to take you to more extreme activity levels. Then the Apple Sport Watch is a stronger, lighter option of the Apple wearable made for those of us who will make it cross a couple higher hurdles or attend a bootcamp or two. The face is stronger and made of ion-X glass, the band is durable, but the jury is out on how water resistant it is. If runners are going to take it running everywhere and swimmers or surfers are going to wear it in the water (Android Wear’s reveal went heavy on the surfer angle, if you remember) it has to have a waterproofing option in the very near future.

13. It Can Really Work You Out: Apple is separating its activity tracking into regular and revved up tracking. Sure, the watch will always know your calories and steps, but you can also use the watch’s Workout app if it’s your running buddy or you have health goals you’re actively trying to hit.

14. Oh, You Fancy, Huh?: If you scoff at the FitBit and see your tech as an accessory worthy of splurging on along with your new bag and shoes, this high-end wearable is your perfect match. Please, you had us at “rose gold,” Apple. This collection’s watch cases are crafted from 18-karat gold, the display is protected with polished sapphire crystal and sophisticated bands are #OOTD-worthy, to say the least.

15. Never Get Lost Again. Ever: Remember that taptic feedback we told you about? It will also work with the watch’s GPS, making sure you don’t get lost by tapping you with the correct time to turn as you’re walking along, making your journey.

16. Your Watch Will Pick Up the Check: Apple Pay wants to revolutionize the way we pay for things on the go, or just on the reg. With your Apple Watch, you’ll be able to tap to pay at thousands of participating locations. So. Easy. So… safe? TBD.

17. Apps Are About to Get Tiny: At launch, get ready to see the standards at your wrists. And with WatchKit readily open and available to developers now, a whole slew of apps are about to have a home on your watch by the time this thing actually ships.

18. Aw, Your Favorite Apps Have Babies Now: Glances, actually — these shortened summaries of apps and info you need are super scannable. So that means it’ll be as easy to look down at your wrist and get everything you need to know from an app or message as it would be to read the time on a normal watch.

19. It’s Easy to Read: A Retina display with super high pixel density makes telling time (important with these watch things) as easy as it should be. It also makes photos and apps, crystal clear so it’s the best of both worlds.

20. Siri’s Still Here: You may shush her on your phone, but she’s going to come in handy when you don’t have a keyboard and all of your controls at your wrist.

21. It’s a Bit of a Diva: Note that the premiere iWearable will only play nice with others if that other is an iPhone 5 and up. Oh, Apple Watch, we suppose you’ve earned the right to be a bit selective about your working conditions.

23. Start Saving Up: Although we were impressed at the pricepoints of the new iPhone (starting at $199 with a two-year contract, mmmk, mmmk) the Apple Watch is going to be more of a splurge. The pricing starts at $349, but expect it to hit 128GB Plus levels once you start adding on the 42mm face in rose gold…

24. The iPod Classic Is Done-zo: Video killed the radio star and now wearable hath offed the MP3 player. With the Apple Watch in the store, the iPod Classic has been shelved.

Looking at the list above, do you have a favorite feature on the Apple Watch or something you’re most excited to use it for? Share below!