Is This 7-Year-Old the Next Jackson Pollock? 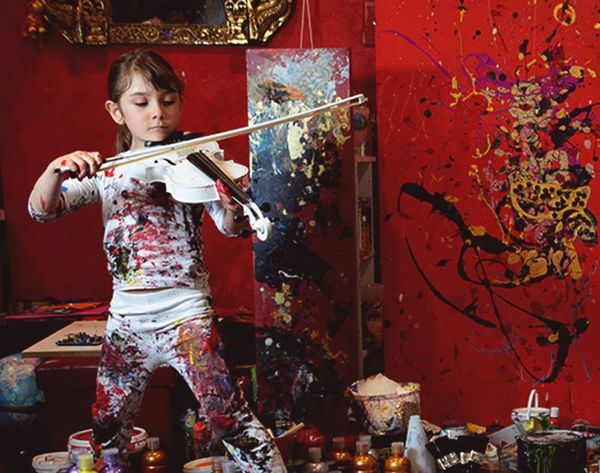 It’s official. We’re envious of toddlers. Recently, Australian painter Aelita Andre, now seven years old, closed her second sold-out show in New York. She’s labeled an abstract-expressionist/gestalt artist, and she’s been selling her work for up to $10,000 since she was nine months old, making her the youngest professional painter in the world.

Scrolling through the work of this painting prodigy, we started a hunt for some more kids who were seemingly born painting, and we found that creativity is truly inherent.

Marla Olmstead: You may recognize Marla’s paintings from the documentary, My Kid Could Paint That. She went professional in her toddler years, selling her abstract work for tens of thousands of dollars. While the documentary and an interview with 60 Minutes raised some speculation as to how much of her art was completely self-directed, her creativity still shines through as she enters her teen years.

Kieron Williamson: In a group of toddlers, this kid may look like a senior citizen, but he has been selling his intricate work since he was six years old. Unlike the previous abstract work, Kieron’s serene landscapes require an eye for detail and the brush skills of a pro… like a Monet-level pro. Now he’s 11, and last year, sold his work for a total of over $1 million. That makes for a serious piggy bank.

Are you inspired by these talented kiddos? Let us know what you think in the comments!

Katelan Cunningham
Katelan is a tech junkie obsessing over all things startup and design. She has entirely way too many apps on her phone and is no stranger to binge-watching. She accidentally fell in love in Los Angeles and that’s where she currently lives, writes, tweets and grams.
Art
Parenting
Art
More From Parenting