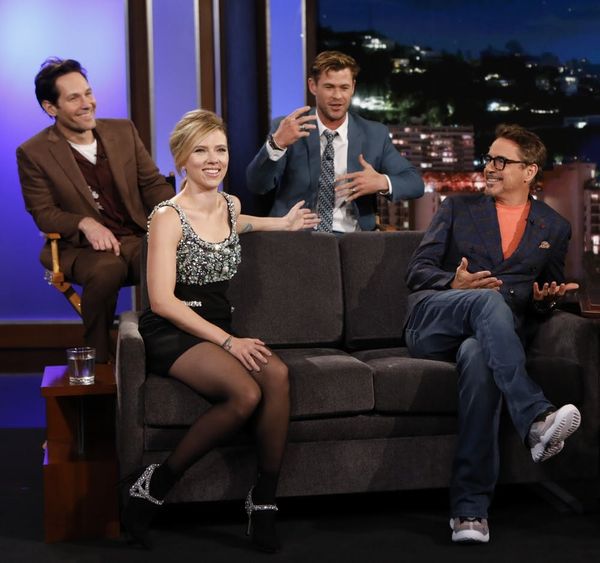 Avengers fans are gearing up for the release of Endgame, and in an effort to make sure viewers of all ages can enjoy the final installment of the long-running Marvel franchise, the movie’s cast tried to recap where we last left the superhero crew in a kid-friendly version of events — to less than kid-friendly results.

“While children love superheroes, I’m not so sure how they feel about intergalactic genocide,” Jimmy Kimmel told his live studio audience on Monday, April 8. He was referring, of course, to the story in the most recent Avengers film, Infinity War, in which Thanos (Josh Brolin) killed off half the universe’s population, including some of our favorite superhero crew.

“It’s no fun to see Spider-Man die,” Kimmel continued. “To get the kids back, we wrote a version of that movie that’s kid-friendly, a children’s book, and we asked the Avengers themselves to read it for us.”

Mark Ruffalo, who plays Hulk, kicked off the fireside story time. “Good evening and welcome to intellectual, dialectical theater of the absurd,” he joked, cracking open an illustrated book. “Tonight’s performance will be an excerpt from ‘Twas the Mad Titan Thanos.”

“Yeah, he blew it,” Johansson added.

“At least I got close enough to actually go for something, unlike the rest of the pathetic, little, useless Avengers,” Hemsworth retorted.

Watch the video above, and see Avengers: Endgame when it opens in theaters on April 26.