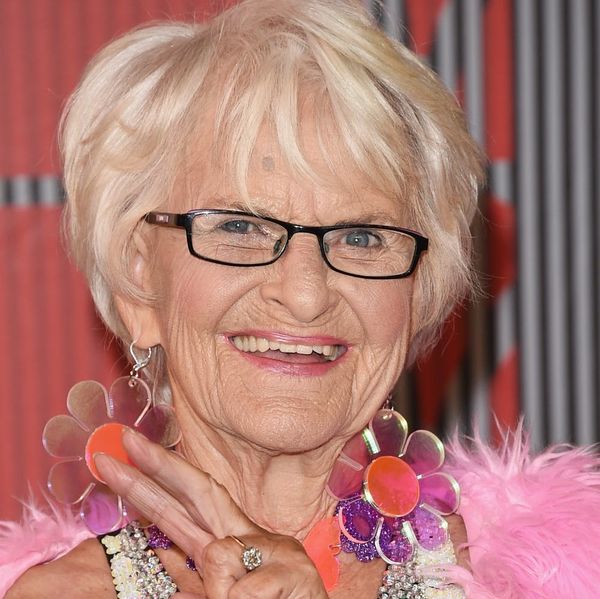 We all know that, as women, we’re supposed to pretend we think other women are younger than they actually are. “A lady never reveals her age,” the old saying goes, as though admitting years of experience and wisdom is somehow the opposite of ladyhood. And so, during a recent afternoon meeting in New York, I tried to age-flatter Internet celebrity Baddie Winkle — even though 1) her Instagram bio reads “Stealing your man since 1928” and 2) I know how to count.

How silly of me.

Her age is the point of her fame, and Baddie doesn’t shy away from admitting either one. Known as the Internet’s hipster grandma, Baddie (real name Helen Ruth Van Winkle) can be found strolling red carpets like the MTV Movie Awards and partying with people a quarter of her age — or younger — all while sporting Miley-worthy outfits, praying for basics and enjoying the occasional “herbal refreshment.” But despite her louder-than-life persona, the 87-year-old is sweet and mellow — and very aware of what she’s doing — in person.

“I didn’t think you’d be so… calm and together,” I confessed.

“Everyone always expects me to be a real hyper b*tch,” Baddie sweetly replied, her first and last swear word of our interview.

I look good when I don't even try to look good pic.twitter.com/eOfn8PU3MW

Baddie came to fame the way most Internet celebs do: as a meme. Her great-granddaughter helped her load a selfie to Twitter in 2014; the tweet got shared a few thousand times, and before long, Rihanna was among her A-List followers. Right away, strangers began sending Baddie wild outfits; when I meet her, she’s wearing a jacket made of sewn-together Furby dolls by designer Gabriella Ostolaza.

“I’ve always been stylish,” Baddie told me. Her junior year of high school she got sent to the principal’s office for wearing a skirt that fell above the knees, a strict no-no at her east Kentucky Presbyterian school and an all around boundaries-pushing look for the time. But her new wacky look, with its pot leaves and tumblr-friendly slogans, is a much more recent development.

“I hope I’m encouraging women to have fun,” she said. “Especially older women.”

While Baddie would not comment on her use of recreational or medicinal marijuana and admits that she’s not much of a drinker (“two cocktails and I’m in the toilet!”), she loves to party — especially with young people. Most of her friends, she told me, are teenagers or in college. “I love ’em! I absolutely love ’em!” she says of her young pals, the 25-and-older of whom appear onscreen with her in a new ad campaign for Smirnoff ICE Electric, her first TV commercial ever. She doesn’t have anything against people her own age, but notices that “older people from 70 on, they’re not into a lot of stuff that I do.”

Despite her self-professed love for young folks, Baddie admits that the teens and 20-somethings of 2016 are VERY different from the youth of, say, 1946.

“We didn’t know anything about sex, drugs or drinking,” she said. Kids today on the other hand know too much — or at least, in Baddie’s opinion, they overindulge. “Information is good,” she said, “but to a certain degree.”

And information is what Baddie hopes she can provide — or, at least, inspiration — by example. She wants people to see her on Instagram and Twitter to know that life doesn’t stop at 70, or 80, or even 90. You don’t have to be young to be relevant or to have fun, and you definitely don’t have to lie about your age.

So here’s Baddie Winkle’s parting advice, ladies and gentlemen, to take with you as the years go on:

Are your grandparents on social media? Tell us their handles @BritandCo!