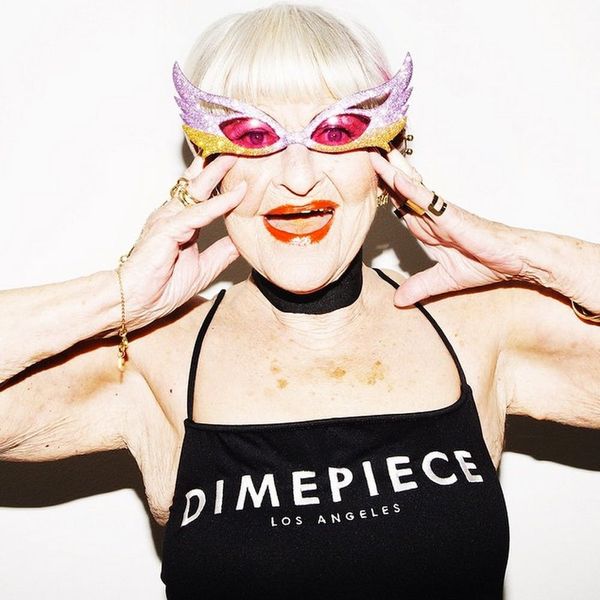 It seems like all the sought-after faces for this year’s biggest fashion campaigns aren’t 18-year-old models, but rather their grannies. 80-year-old novelist, Joan Didion kicked things off earlier this year as the star of Celine’s recent ad campaign, Joni Mitchell then became the face of YSL and now Baddie Winkle, an 86-year-old grandmother, is the newest model for swimwear brand DimePiece L.A.

While DimePiece is a brand that typically targets 20-something festival-goers, Baddie is no stranger to rocking clothes that are designed for someone a little (okay, a lot) younger. The Kentucky native has a whopping 765,000 followers on Instagram, mostly because of her youthful tendencies. She loves Beyoncé, Drake and Kanye West and can often be seen rocking outfits like furry pink separates from O-Mighty, a light-up coat and even a tie-dye tee that reads “will commit sins 4 Chipotle.” We promise this isn’t a belated April Fools’ joke.

When announcing the #stateofwinkle campaign on Instagram, DimePiece L.A. wrote, “The brand has always stood for timeless female empowerment and continues to encourage this mindset in their newest campaign.” She’s even caught the eye of her style twin, Miley Cyrus, who not only commended the brand on their decision to work with Baddie, but even photoshopped herself into a pic with her.

We never thought our style icon would also qualify for a senior discount, but it’s seriously looking like that might be the case.

Do you know of any other older Instagram stars we should know about? Share with us in the comments below.

(Photos via @baddiewinkle and @dimepiecela)