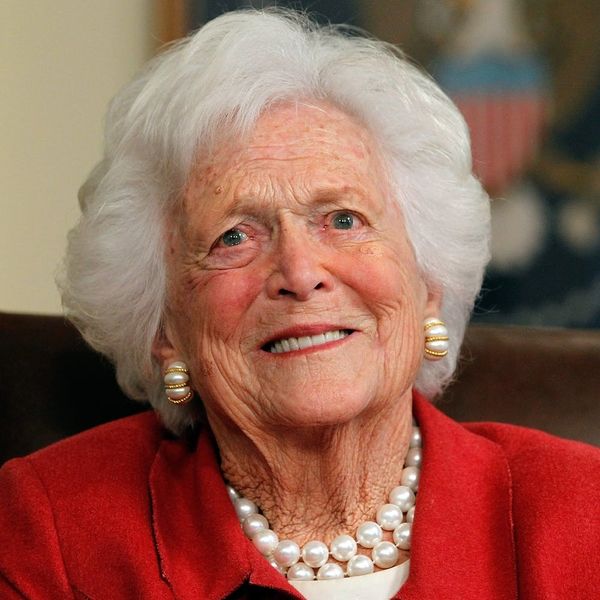 “Laura, Barbara, Jenna, and I are sad, but our souls are settled because we know hers was,” he said. “Mom kept us on our toes and kept us laughing until the end. I’m a lucky man that Barbara Bush was my mother. Our family will miss her dearly, and we thank you all for your prayers and good wishes.”

The news comes just days after the family announced that, after a series of hospitalizations for her failing health, the beloved Bush matriarch would no longer seek medical treatment.

Tributes from politicians and celebrities poured in following the news of Barbara’s passing, including from comedian Ellen DeGeneres, who honored the family literacy advocate for living “an incredible life.”

Barbara Bush lived an incredible life. I’m sending my love to her family.

President Donald Trump and former President Barack Obama shared their family’s condolences via Twitter, as did former President Bill Clinton, whose touching tribute praised the “fierce and feisty” woman who “showed us what an honest, vibrant, full life looks like.”

.@FLOTUS Melania and I join the Nation in celebrating the life of Barbara Bush: pic.twitter.com/4OW72iddQx

Our statement on the passing of Former First Lady Barbara Bush: pic.twitter.com/MhTVYCL9Nj

Barbara Bush was a remarkable woman. She had grit & grace, brains & beauty. She was fierce & feisty in support of her family & friends, her country & her causes. She showed us what an honest, vibrant, full life looks like. Hillary and I mourn her passing and bless her memory.

Our thoughts and condolences are with the Bush family.