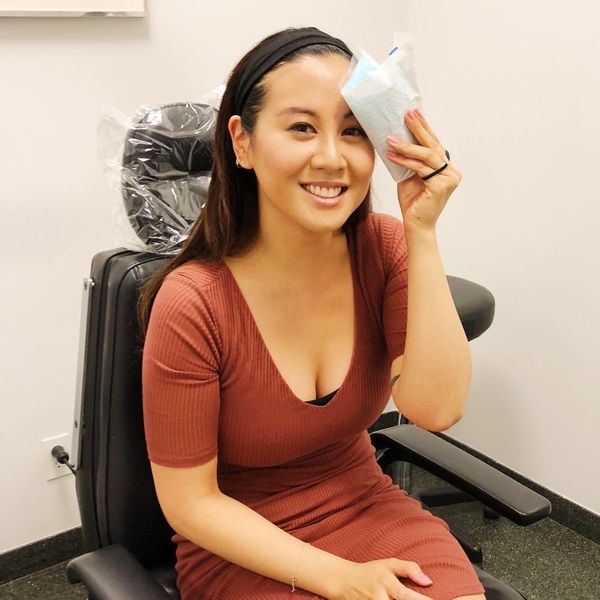 Accidents are a part of life. My particular accident happened several years ago and involved a nasty spill that led to cutting myself right below the eyebrow (brows NOT on fleek). A trip to the ER and some liquid stitches later, I was as good as new… sort of. While the outcome could have been much worse, my moment of clumsiness left me with an inch-long scar about a quarter-inch deep. For better or worse, it was mine and I had to learn to live with it — that is, until I didn’t.

Enter Bellafill. When I first heard about Bellafill, it was already getting accolades across the skincare industry. Unlike other injectables, Bellafill is made with 80 percent purified collagen-gel, which is something your skin already has (collagen is the main protein found in your body and gives your dermis and connective tissues structure) and 20 percent polymethyl methacrylate (PMMA) microspheres, which are tiny balls that tentpole the space the filler is injected into.

It’s the only dermal filler approved by the FDA to treat smile lines and deeply indented acne scars. And while mine wasn’t an acne scar, it was a great candidate for the treatment, as Bellafill can only be used on areas of the face that don’t make a ton of movement. (The PMMA microspheres can migrate over time in parts of your face that move a lot — sorry, lips.)

But beyond its composition, Bellafill is particularly notable for its effects. The results last five years, and before rolling out to the public, it underwent a rigorous five-year testing phase with 1008 patient subjects across 23 clinics in the US. And even at the end treatment phase, Bellafill permanently improved the appearance of the affected area. Pretty cool, right?

Armed with this information, I made an appointment with NYC-based Z. Paul Lorenc, a board-certified aesthetic plastic surgeon, and one of the consulting docs for Suneva Medial, Bellafill’s parent company. Before I could actually undergo treatment, Lorenc had to be sure that my skin wouldn’t react adversely to the product, so I had to do a mandatory skin test a month ahead of my procedure. The minute-long test consisted of Lorenc injecting a small amount of Bellafill into my arm, which would then be monitored for the next month. After 30 days without issues, I was back in his office to tackle my scar.

First, we took “before” photos to serve as a base for comparison. After the photos were snapped, Lorenc used a marker to indicate exactly where the filler needed to go. There was the option to use a numbing cream, which I declined. (Why? I couldn’t tell you.) As a heads-up, while the procedure is brief, if you do have a low pain tolerance, I would definitely recommend the numbing cream. In my case, Lorenc had to use the needle to break up some of the scar tissue under my brow before injecting any Bellafill. Luckily for me, he did it all in a couple of swift movements and then it was all over. From there, I held an ice pack on the area for 10 minutes and, aside from a little redness, you couldn’t even tell I’d had something “done.” Despite the rougher-than-usual injection, there was no bruising afterwards, and I was even told I was free to apply makeup later if I wanted to.

I have to be honest; at first, I was concerned with the results, as I could feel the product under the skin at the injection site, making my scar equally as, if not more, pronounced. But Lorenc explained that the filler’s microspheres and collagen would settle into a groove and become less noticeable over time — and thankfully, they did.

Six weeks later, I was back on the Upper East Side reporting nothing but positive results. If I said that Bellafill made my scar disappear completely, I’d be lying. However, rather than being a quarter-inch deep, it’s now more like 1/8th of an inch deep. I can still feel the product under my skin, but it has smoothed out considerably. And Lorenc tells me that the results will only keep improving as the microspheres encourage my skin to keep generating its own collagen. No complaints there.

As with any cosmetic procedures, it’s worth noting that Bellafill can be costly (the average around the country seems to be around $1000 per treatment), but if you have the funds and a good doctor, I would recommend it. Just be sure to do your research first!

Would you try filler for a scar? Tweet us @BritandCo!

Kimberly Wang
Kimberly Wang writes about all things pop culture, tech, style, and beauty. She's a Bay Area transplant and has an MFA in Creative Writing from Columbia University. On a sunny New York day, you can find her hanging out with her mini schnauzer Isabelle Jellybean on a blanket in Central Park.
New Beauty Products
Skincare
New Beauty Products Skincare products
More From Skincare